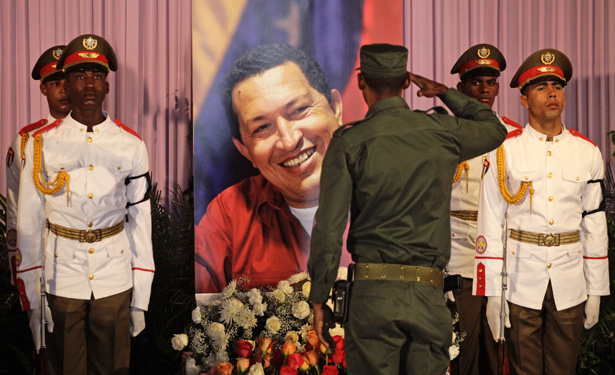 Recently Mahmoud Ahmadinejad predicted that Hugo Chávez would return on the clouds with Jesus on Resurrection Day. Then, Venezuela’s left-wing „president in charge” and hopeful successor to Hugo Chávez, Vice President Nicolás Maduro, gave Hugo credit for convincing Christ to influence the papal conclave to choose a South American pope. Immediately following the white smoke puffing from the Vatican chimney, Nicolás did some puffing of his own, only his was emanating from a bodily orifice bearing no resemblance to a chimney.

Based on his comments, Nicolás Maduro apparently thinks the room-temperature despot is sitting at the right hand of God, still fulfilling the calling of dictator. In the mystical eyes of Maduro, a follower of the late Bhagawan guru Śri Sathya Sai Baba, Chávez is also a „spiritual saint and miracle worker.” The late president of Venezuela is proving so potent a force that at his funeral he actually got Mahmoud to lose his head and commit „haram” by hugging his grief-stricken mother, Elena Frias de Chavez.

Nonetheless, Maduro, who must be smoking something other than Venezuelan cigars, said, „We know that our commander has risen up there and is face to face with Christ.” That comment, which wasn’t a joke, prompted laughter in the crowd Nicolás was addressing. In Maduro’s opinion, Hugo was such a great persuader that when the conclave in Rome was having difficulty choosing a pope, Hugo „got to Christ,” pulled Him aside and whispered in His ear, and thus „influenced things so that a South American pope was chosen.”

And that’s not all. According to Maduro, „One of these days [Chávez] is going to call a constitutional congress in heaven to change the church in the world, so that the people, only Christ’s pure people rule in this world.” That sounds more like Mahmoud’s vision for Islam than Jesus’ vision for a fallen planet the Bible says is destined for destruction by fire.

Besides, if Hugo Chávez is so persuasive that he was able to move the hand of God to install Argentine Archbishop Jorge Mario Bergoglio as Pope Francis I, how come he couldn’t persuade the Almighty to cure his terminal pelvic cancer and allow him to oppress Venezuela for another 14 years?

Everyone knows how Hugo’s story ended. Therefore, in death as in life, Chávez is so highly esteemed that there were plans to call in a taxidermist – of sorts – to preserve Hugo’s body so that he can be put on exhibition in Caracas. That way, Chávez can lie in state in a manner similar to dead dictators he has admired, such as Kim Jong Il, Hồ Chí Minh, Stalin, Lenin, and Argentine megalomaniac Evita ‘don’t cry for me’ Perón.

Based on Maduro’s assessment of the sainted Hugo Rafael Chávez Frías, one would think the nation of Venezuela was in possession of an incorruptible corpse. Now we come to find out that after leaving St. Hugo’s body on display in a military academy like some sweaty salami sandwich that’s been sitting in the sun too long, embalming experts who were called in are of the opinion that Chávez’s carcass may have passed its sale date, so to speak.

Russian embalming specialists had expressed their willingness to drain Chávez’s blood from his tissues, remove his organs, pump him full of embalming fluid and submerge his sorry ass into a bathtub filled with formaldehyde, and then put the lid on it, wrap it in a white cloth, and basically pickle him in a room with „precise temperature and humidity conditions” for six months.

The Russians were even willing to instruct the Venezuelans on the upkeep, temperature and humidity requirements, the „bacterial threats,” the need for a sterile sarcophagus, the twice-weekly inspection, and the need for Hugo to be submerged every year and a half in the embalming solution for one month, then dried off, gussied up, and plopped back out on the display bed.

Now we come to find out that because Chávez was distracted by telling Jesus who His pick for pope should be, he forgot to transmit the directive to the people in charge of his preservation that if his corpse was going to be dressed up and put on permanent display, „precautionary steps would have to have [been] taken much earlier.” In other words, once again, from the smell of things, there’s something rotten in Caracas.