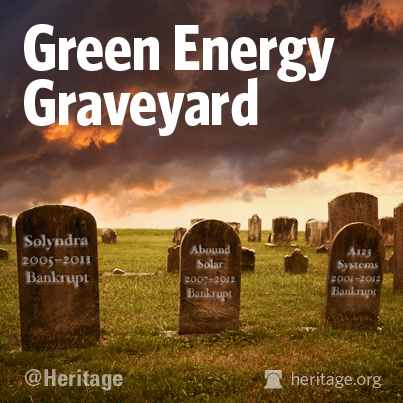 While there’s speculation over which federally supported green energy company may be the next to declare bankruptcy, plenty have already gone belly up. In one of the most extensive compilations to date, Heritage has identified 19 bankrupt green energy companies-unable to make it even with the $2.6 billion in financial assistance and incentives the government promised.

This blog is part of the “Green Graveyard” series, which will profile each of the 19 now-bankrupt companies and detail all the types of government assistance offered. These companies were all part of President Obama’s attempt to stimulate the economy by developing and expanding the “green” energy industry.

The problem is that these taxpayer-funded handouts never achieve the intended objective. Rather, they artificially support politically preferred companies and industries, like green energy, while shifting jobs and resources from another sector of the economy.

As the following examples demonstrate, the government’s proclivity to offer financial assistance and incentives to the green energy industry is a bad policy that’s been plaguing Washington since long before President Obama took office.

News of federally backed bankrupt energy companies is infuriating, but failed companies are not the only problem. The fundamental problem is that the federal government is risking taxpayer dollars to bet on companies in the first place. Regardless of their fate, the government should not be “investing” in private-sector companies, especially for an industry in which there is already ample demand and diverse supply.

The fact is, we should be equally infuriated about the successful companies. These are companies that have good products to offer and do not need taxpayer support. There is a phrase for subsidizing successful companies: corporate welfare. As Heritage’s Nick Loris has explained many times before, “Two kinds of companies seek subsidies: economically uncompetitive companies, which need the subsidy to survive, and potentially competitive companies, which use subsidies to pad their bottom lines. Neither case can be justified.”

Nonetheless, pointing out the failed companies is important, as it reveals the contortions politicians will go through to support private companies when their political narrative is at stake. While government intervention in the private economy didn’t start and will likely not stop with President Obama, the growing list of failed companies demonstrates the futility of central economic planning.

Before taking a closer look at the individual bankrupt companies and the financial assistance and incentives the government offered to them, a few caveats. These numbers do not reflect the amount of government funding the company necessarily received or used-these are amounts the government was willing to risk. These figures do offer estimations of assistance provided by local, state and/or federal governments. This assistance could have been promised to the companies in a variety of ways, including tax credits, loans, loan guarantees, grants, and other forms of financial incentives and support. The numbers below are the best calculations possible given the incomplete, at times even inconsistent, information from the government and other sources.

Additionally, during bankruptcy proceedings, these companies could very well be purchased by another company and be brought back to life. However, their tombstone in the Green Graveyard will remain as a reminder of the darker days.

As our Green Graveyard series continues, we will go in-depth with each of these companies and provide details of funding sources, timelines, and more.