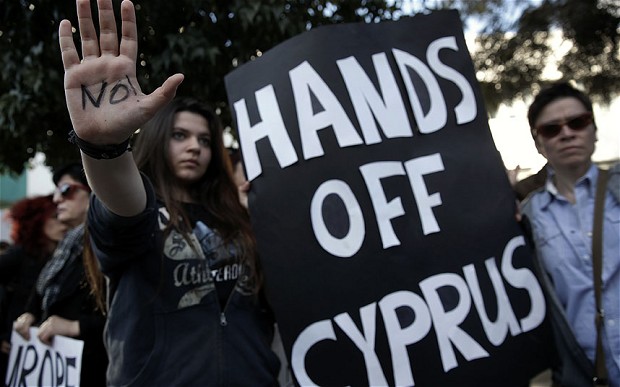 In what has become a depressingly familiar EU template, yet another “eleventh hour” deal was reached between the European Central Bank (ECB) the European Commission (EC) and the International Monetary Fund (IMF) — known as the “troika” — and Cypriot President Nicos Anastasiades to avoid national bankruptcy. “It’s been yet another hard day’s night,” European Union Economic and Monetary Affairs Commissioner Olli Rehn told reporters in Brussels, where the deal was put together. “There were no optimal solutions available, only hard choices.”

Hard choices indeed. In return for a $13 billion ($10 billion Euro) bailout, the tiny Mediterranean nation has agreed to wind down Laiki Bank, Cyprus’s second largest, wiping out thousands of jobs in the process. Depositors holding more than $130,000 will take potentially huge losses, the percentage of which has yet to be determined. But because the bank is expected to yield approximately $5.4 billion to satisfy the latest agreement, it is estimated that those losses will be as much as 40 percent, more than four times the 9.9 percent that was part of the deal rejected by the Cypriot parliament in a unanimous 36-0 vote last week.

No parliamentary vote will be required this time around. In the previous deal, the bailout money confiscated from bank accounts was going to be raised by imposing a nationwide tax on bank accounts that were both insured and uninsured. Imposing a tax required a vote by the Cypriot parliament. Because this new grab only targets uninsured accounts at Laiki Bank and the Bank of Cyprus, nine laws passed last Friday by parliament allowing bank “restructures” to go forward means no further vote is required.

Depositors with less than $130,000 in holdings will remain ”fully guaranteed.” In a deal reminiscent of the TARP bailout, Laiki Bank will be immediately dissolved into a “bad bank” containing uninsured deposits and toxic assets, while the remaining insured deposits with be transferred to the “good” Bank of Cyprus, the nation’s largest lending institution.

EU-philes and other assorted leftists offered their typical rationale for this latest effort. The New York Times framed the deal as one that would “prune the size of Cyprus’s oversize banking sector, bloated by billions of dollars from Russia and elsewhere in the former Soviet Union.” IMF leader Christine Lagarde called it a ”a comprehensive and credible plan” to restore faith in the nation’s banking system. French Finance Minister Pierre Moscovici deemed the deal necessary because Cyprus is “a casino economy that was on the brink of bankruptcy.” Cypriot Finance Minister Michalis Sarris claimed that “we really have avoided a disastrous exit from the eurozone.” German Finance Minister Wolfgang Shaeuble contended the agreement was “capable of stabilizing the situation in Cyprus.”

The realists were far less sanguine. ”This decision is painful for the Cypriot people. This decision was a defeat of solidarity, of social cohesion, which are fundamental freedoms, fundamental principles of the European Union,” Parliament President Yiannakis Omirou told AP. ”So as soon as possible we have to prepare our economy to go out from the mechanism and the troika,” he added. Nicholas Papadopolous, chairman of the Cypriot parliament’s finance committee, was far more direct. ”We are heading for a deep recession, high unemployment. [The troika] wanted to send a message that the Cypriot economy ought to be destroyed, and they’ve succeeded in a large part-they’ve destroyed our banking sector,” he told the BBC. Russian Prime Minister Dmitry Medvedev spelled out the meaning of the deal in no uncertain terms. ”The stealing of what has already been stolen continues,” he said.

Perhaps the most amazing-and utterly naive-aspect of this deal is the idea that what has happened in Cyprus will stay in Cyprus. UK Independence Party (UKIP) leader Nigel Farage called on British expats in Spain to pull their money out of Spanish banks, contending the EU leaders had “crossed a line” in Cyprus. “There is going to be a big flight of money and that flight of money won’t just be from Cyprus, it will be from the other eurozone countries, too,” he warned. “There are 750,000 British people who own properties, or who live, many of them in retirement, down in Spain. Now that we see the EU are prepared to resort to anything to keep alive their failing euro project, our advice to expats living down in the Mediterranean must be, ‘Get your money out of there while you’ve still got a chance.’”

Christopher Pissarides, a Nobel prize-winning economist advising President Nicos Anastasiades, contended that the troika is treating Cyprus “far worse” than other EU basket cases that needed bailouts, and predicts that ”the way we deal with this situation has implications for the rest of Europe.” “We have a German finance minister who comes and tells us Cypriots that ‘We don’t like your economic model, bankrupt your banks and you can sort it out on the way’…The difference with Cyprus is that it is small. Is Luxembourg going to be next in line Is Malta going to be next in line Small members of the Eurozone beware,” he cautioned.

In the same Friday session during which bank restructuring laws were passed, the Cypriot parliament also imposed capital controls to prevent a likely stampede of money out of the country. Yet the EC, claiming they were acting on behalf of “Cypriot authorities” said that such controls, which violate EU laws regarding the free flow of capital, can only be imposed for a short time. ”This is a restriction on movement that may only last a few days,” said Michel Barnier, the Commissioner responsible for the EU’s single market.

Cypriot banks are supposed to open today, after imposing cash withdrawal limits at bank machines over last weekend when Cypriots began withdrawing their money in droves. At first, they could withdraw 400 Euros, then 260, and then only 100 Euros, after the central bank in Cyprus stepped into prevent a run. Cash was king over the weekend as well, as several retailers refused to take credit cards or checks. “It’s been cash-only here for three days,” said Ali Wissom, a restaurant manager in Nicosia. “The banks have closed, we don’t really know if they will reopen, and all of our suppliers are demanding cash-even the beer company.”

It will undoubtedly get worse. Russians, who maintain accounts totaling $31 billion of the total $88 billion held in Cypriot banks, will surely find other places to put their money, after having been caught flat-footed by this deal. Dozens of them descended on the country last week to vent their anger at Cypriot officials. Fedor Mikhin, who owns an international shipping business, illuminated the implications. “The locals should understand: as soon as the money leaves, the people who go to restaurants, buy cars and buy property leave too,” he said. “The Cypriots’ means of living will disappear. They are saying we laundered all the money, but they lived on that money for ten years and forgot about it,” he added.

European Commission President Jose Manuel Barroso insists the future is less certain.”I am confident that the program will work, but let’s be honest. At this moment, we cannot say exactly what the impact is going to be,” he told reporters. ”It will depend on the level of implementation and the commitment of Cyprus itself.”

The “impact” may be more than monetary. A public poll conducted by Cyprus’s Sigma television reveals that more than 66 percent of those surveyed would be willing to drop the euro and move closer to Russia. Much of the island’s anger has been directed towards the EU in general, and German Chancellor Angela Merkel in particular, whose nation Cypriots consider the chief architect behind the deal. “There is a clear danger of this area becoming a platform for confrontation between East and West,” said Harry Tzimitras, director of a research center in Nicosia.

It already has, and the more than 50,000 Russian-speaking people who have come to Cyprus from the former Soviet Union deeply resent the underlying rationale behind this confiscation of funds. “We are not criminals, arms dealers or bootleggers,” said Sergey Ivanov, a Russian who runs a wine business. “There is a generation of Russian businessmen like me who have lost faith in the Russian government, in Russian banks and in Russian laws. That is why we are in Cyprus.” A Nicosia-based lawyer was equally contemptuous. “I don’t understand why it is money laundering when it’s in Cyprus, when in London it’s a perfectly respectable company.”

There is no question that Cyprus has benefited greatly from its 30-year reputation as a tax haven. Foreign companies pay a flat tax rate of just 10 percent, making it extremely attractive to operate there. That reality may explain what this deal is really all about: to send a message that the socialist beast devouring Europe will brook no challenges to its high-tax, supra-nationalist authority despite the reality that it was the supra-nationlists and their lust for a “new world order” under the EU that set the entire “poor southern Europe versus rich northern Europe” dynamic in motion. It is a dynamic that has a financially secure Germany berating its spendthrift southern neighbors for being fiscally irresponsible, even as its heavily export-dependent economy requires such nations to buy German goods.

Ever since the European fiscal crisis began, the bureaucrats in Brussels have successfully convinced the majority of people living in places like Greece, Spain and Italy that national bankruptcy and a return to a national currency would be far more catastrophic than the ongoing austerity measures currently being imposed.

Yet one has to wonder how long that argument will continue to resonate. In Greece, for example, the unemployment rate reached a record-setting 27 percent in November. Almost unbelievably, that rate soars to 61.7 percent for those in the 15-24 age group. They are in their sixth straight year of a “recession,” that is really an outright depression, and their economy shrank another 6.45 percent in 2012. Furthermore, 35 percent of the entire population will be officially living in poverty by the end of 2013, an increase of five percent in just two years, all with no end in sight.

Can national bankruptcy and a return to the drachma, which would then be devalued to attract foreign investment, be any worse

Coming to that conclusion is precisely what the Brussels bureaucrats and the international finance establishment are desperately trying to suppress. Yet in their unrelenting arrogance, they have overplayed their hand. The ultimate fundamental that encourages people to put their money in financial institutions is trust. That trust has now been obliterated. “We now have a new type of rule and everyone within the euro zone has to sit down and see what that implies for their own finances,” warned Christopher Pissarides.

David Folkerts-Landau, chief economist of Deutsche Bank, was far more honest. “If a single country leaves the euro zone, it sets a precedent,” he said last week. “No one will ever again believe that a country will not leave the euro zone.” Whether it stays or goes, Cyprus is facing a nightmarish scenario. What the people of that nation have to figure out is which scenario puts them in a better position for the future.

Cypriots might take their cue from Iceland President Olafur Ragnar Grimson. When that nation faced a banking crisis in 2008, they took a capitalist approach to the problem: they let the banks go under. Five years later, the economy is growing at a three percent clip, and their unemployment rate, which rose to 8.6 percent in January 2011, was down to 5.5 percent in January 2013. At the World Economic Forum in Davos that same month, Grimson posed a fundamental question. ”Why do we consider banks to be like holy churches” he wondered. Perhaps Cypriots-along with a lot of other people-might ask themselves the same question.