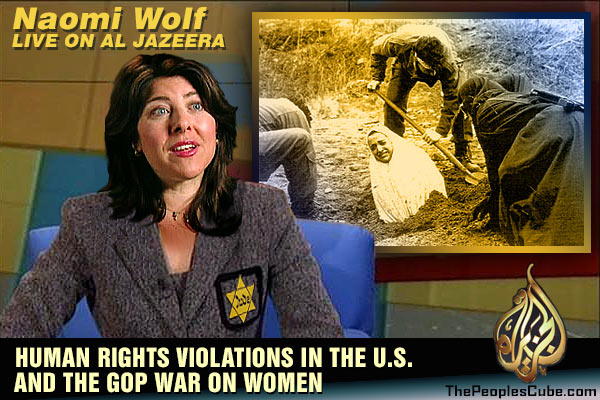 In the past few weeks, militant jihadism has won two major propaganda coups.

First, Al Gore, the world’s most famous critic of dirty oil, sold his „progressive network” Current Media, LLC, to the oil sheikhs of Qatar for a reported $500 million.

Second, Naomi Wolf, renowned author of Vagina: A New Biography and other top feminist works, sold her soul to the same Islamist patriarchy.

The price of Naomi’s soul (possibly including other appendages) has not yet been named. As one wag put it, Naomi will now be the official „on-air Jihadess” of the biggest Islamist propaganda network on the planet.

Al Gore’s future looks bad because of huge shale discoveries all over the world, from Poland to Canada. Shale gas has already turned the United States into a net exporter of natural gas, even with the eco doomsters of the Obama crowd in charge. The doomsters can see the writing on the wall. Natural gas is the cleanest source of energy known.

All the public rants against hydrocarbons are going to disappear, leaving the human race both happier and healthier. Millions of dumb suckers haven’t realized it yet, but Al knows it’s time to sell and get out of town. Gore knows the oil business, because he is heir to a large Occidental Petroleum fortune. He has people who study the oil supply every single day. The Chicago Carbon Exchange crashed four years ago, and they know the jig is up.

So Al is getting out at top dollar.

What about Naomi Wolf? Her business of feminist agit-prop is also on the skids. Naomi has just sold her radical soul to the last murderous patriarchs on earth. The oil sheikhs keep their women pregnant, barefoot, and locked in the harem.

Even Naomi knows that.

Feminists have been screaming themselves silly about America’s „patriarchy” for decades, while American men gave them everything they desired, including abortion on demand, any imaginable use of their genitalia, and most of all, the free speech right to peddle any degree of anti-Western nonsense.

In return, Naomi has written articles for the rad left with titles like „Fascist America, in 10 easy steps,” saying

„From Hitler to Pinochet and beyond, history shows there are certain steps that any would-be dictator must take to destroy constitutional freedoms. And, argues Naomi Wolf, George Bush and his administration seem to be taking them all.”

Alas, George W. Bush is gone, and all the blind Guardianistas can’t see a hint of danger of fascism today in Obama’s Predator assassination policy. The pacifist left is strangely silent, and thank heavens, civil rights are well-protected under Attorney General Eric Holder.

As for the „constitutional freedoms” in Qatar, these come straight from the Holy Koran, a well-known document  protecting the rights of women, Jews, Christians, Hindus, Buddhists, and atheists.

So – why did Naomi sell out to the desert sheikhs of Qatar?

Let’s face it, Ms. Wolf is also facing a declining market. Naomi Wolf is in the feminist propaganda business, where she takes boring dissertations written by feminist „theorists” and turns them into popular best-sellers. When radicals like Eve Ensler make a hit with Vagina Chronicles, Naomi scents big money and writes a popular book like Vagina: A new biography.

Ms. Wolf’s real job is to promise her readers thrilling orgasms forever and ever, a Paradise on Earth for millions of sex-starved women. Add a constant stream of complaints about hubby, whose imaginary „patriarchy” keeps two billion woman in abject frustration, and you have the two biggest selling points of pop feminism.

Ms. Wolf delivers a satisfying enemy and a promise of pleasure eternal, all packed in that provocative organ Down There.

But why is pop feminism declining? Naomi’s problem is not like Al Gore’s technological revolution of vast new hydrocarbon discoveries.

But Ms. Wolf is a creature of PR, and her publishers keep constant track of book sales. If sales of her Vagina are declining, she needs a new schtick. (Pardon the phallic pun).

Al Jazeera provides the schtick. Naomi is getting middle-aged and fat, and part of her PR magic has been to look eternally young, to fit the fantasies of her readers. The news photo that appeared with the announcement of her surrender to the patriarchs made her look like that Worker Woman of the Thirties, straight Soviet Realism, with the wind in her face and talking heroically into (you should pardon us) a big microphone.

The sheikhs get what they want, a famous and popular „radical feminist” to prove to millions of suckered viewers how modern and „progressive” those Islamic fascists really are. Naomi is our Tokyo Rose.

Naomi gets what she wants, which is much more than thirty pieces of silver. The exact amount hasn’t been publicized, because that would be in bad taste.

As for half-billion Muslim women who have just been pushed back into the 7th century by the „Arab Spring,” they get exactly nothing. They are once again jailed in their homes, forbidden to walk outside without a male relative. Women are routinely threatened, beaten, and murdered to protect the „honor” of the family, wherever Islam takes over. That’s a real patriarchy.

It’s very sad, but it can’t get in the way of real money.

Like Al Gore, Naomi plays a mass media sucker game. She has simply turned her declining brand into a fat contract from those oil sheikhs. A couple of trillion dollars come out of those oil fields every week. That kind of money buys a lot of demagogues.

But what about liberating two billion women?

What about saving the Earth from all that nasty, dirty oil?

Well may you ask.