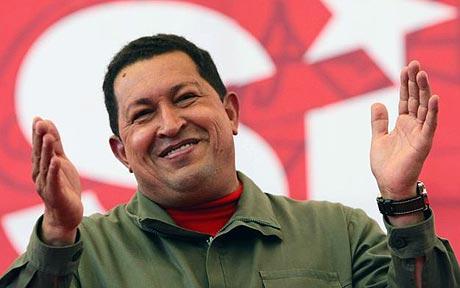 Various dictators, killers and fruitcakes are fighting back manly tears today. If a leader can be judged by his friends, then the fact that the world’s most brutal regimes have paid fulsome tribute to Hugo Chavez reveals much about the late Commandante.

In Syria, Bashar al-Assad’s regime praised Chavez for his „honourable” support of, well, Bashar al-Assad. Chavez had „stood on the side of the Arabs’ legitimate rights” and opposed “the conspiracy against Syria,” said the official news agency in Damascus. Let’s remember that last October, Chavez declared: “How can I not support Assad? He’s the legitimate leader.”

As it happens, Assad inherited the presidency of Syria from his father in the style of an absolute monarch. If Chavez considered him “legitimate”, then this great socialist must also have been a supporter of the hereditary principle.

You will not be surprised to read that the most quixotic tribute of all came from President Mahmoud Ahmadinejad of Iran. Hailing Chavez’s human virtues was not quite enough; Ahmadinejad also praised the late president in quasi-religious terms.

Remember that Ahmadinejad thinks the 12th Imam of the Shia faith (known as the “perfect human”) will one day return to rule the world in peace and justice. The Imam will, according to his tradition, come back with Jesus Christ as his loyal lieutenant. But Ahmadinejad thinks the “perfect human” will need more help. To make his entourage even more distinguished, Hugo Chavez will apparently be along as well.

Thus Ahmadinejad hailed the „brave, strong” Commandante, adding: „I have no doubt that he will return, along with the righteous Jesus and the perfect human.”

Where does one begin with a statement like that? Forget the millenarian mysticism for a moment and remember that Ahmadinejad helps to run a militarised, repressive, ultra right-wing theocracy. Meanwhile, Assad is the besieged figurehead of a de facto monarchy.

No genuine, Left-wing progressive should have anything to do with them. Except that both are virulently anti-American. And that, in Chavez’s eyes, meant they should be forgiven any crime and praised to the skies. This is not the axis of evil, but the axis of absurdity.