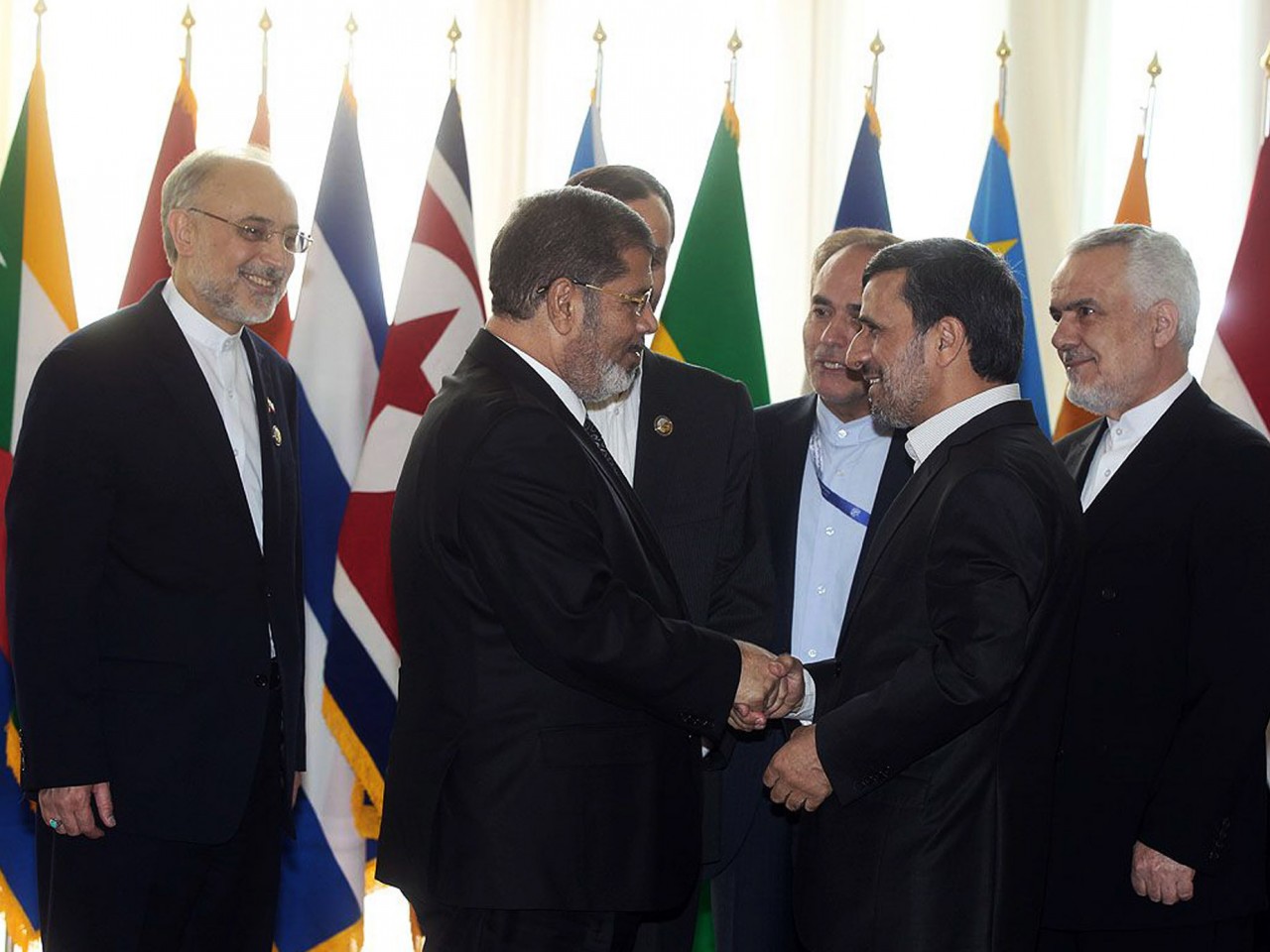 Iranian President Mahmoud Ahmadinejad is visiting Egypt this week, becoming the first Iranian head of state to visit Egypt since Tehran broke off diplomatic relations with Cairo in 1980.  Ahmadinejad is in Cairo for a summit meeting of the inter-governmental Organization of Islamic Cooperation (OIC), but he hopes his meetings with Egyptian President Mohammed Morsi will help the Iranian regime to forge a strategic alliance with the Muslim Brotherhood-led government in Egypt.

Ahmadinejad’s journey to Cairo follows the icebreaker of Morsi’s visit last August to Tehran during the meeting of the Iranian-led Nonaligned Movement and a visit last month to Cairo by Iran’s foreign minister.

Although Ahmadinejad was confronted by an angry mob and almost hit in the head with a shoe while leaving the historic Al-Azhar mosque and university with Morsi, Ahmadinejad was unbowed.  Recall that he did not care what his own people thought of his fraudulent re-election as they gathered in the streets of Tehran. Thus, unruly protesters in Cairo meant absolutely nothing to him.  What mattered to Ahmadinejad was that the Egyptian government rolled out the red carpet in a welcoming ceremony at the Cairo airport and appeared receptive to strengthened ties.

“Egypt is a very important country in the region and the Islamic Republic of Iran believes it is one of the heavyweights in the Middle East,” Iran’s foreign minister, Ali Akbar Salehi, told Iran’s state-run Islamic Republic News Agency (IRNA) earlier this week. “We are ready to further strengthen ties.”

The head of Egypt’s interest section in Iran, Khaled Amareh, said Egypt-Iran relations date back to as early as 500 BC.  “The establishment of bilateral ties between Egypt and Iran is greatly important for the region, and we hope to see ever increasing ties between the two nations,” he said last month during an interview with IRNA.

Although Iran is a Shiite-majority country and Egypt is a Sunni-majority country, the Iranian leaders are willing to put aside the historical theological conflicts between Shiites and Sunnis and focus on areas of common interest. Ahmadinejad explained the overarching bond among Muslims this way in an interview with Egypt’s state-run Al-Ahram daily, responding to reports of some differences of opinion between him and Egypt’s leading cleric:

For example, 40 people are sitting in a bus and they differ among themselves, but they are all heading to the same destination and to the same goal. What is common among us is bigger than our differences.

As an example of their common goals, the Muslim Brotherhood’s innate hostility towards Israel dovetails nicely with the Iranian regime’s hatred of the Jewish state. At the OIC summit in Cairo, Ahmadinejad warned, “The Iranian people are ready to march on Israel to destroy it if it launches an attack adventure against Iran.”

Faced with the prospect of losing influence in Syria, as its ally President Bashar al-Assad desperately tries to hang on to power, and feeling encircled by hostile governments in Saudi Arabia, Qatar, and other Gulf states, the Iranian regime is looking for a new dance partner. It appears willing to give Egypt a pass on supporting the opposition forces battling to bring Assad down, most likely because Egypt is presently too weak and inwardly focused to be of any real concern to the rebel cause.  On the other hand, it is in Iran’s interest to buttress Egypt’s attempts to re-assert its own influence in the region to counter-balance that of Iran’s main Middle East rivals in the Gulf region.

Iran also sees an opportunity to wean Egypt away from economic and military dependency on the United States. Exploiting Egypt’s debt squeeze and its plunging currency reserves, Ahmadinejad said that his government was ready to provide a “big credit line” to help revive Egypt’s battered economy.

“We can provide a big credit line to our Egyptian brothers,” the soon departing Iranian president told Al-Ahram. “If the two peoples cooperate and join forces, they can become an important element.”

The initial reaction from Egyptian leaders was caution, as they do not want to jeopardize the economic lifeline extended by the United States and the International Monetary Fund by being seen as overly intertwined with Iran’s financial system. Moreover, Egypt has to walk a tightrope in its relationship with the United States if it wants to receive billions of dollars in financial aid and advanced weapons such as F-16s to build up its military.  On the other hand, Morsi sees some leverage in hedging his bets and keeping the U.S. on edge as to just how far Egypt is willing to go in pursuing deeper ties with Iran.

Ahmadinejad’s offer of a credit line to Egypt may be a difficult promise to keep in light of Iran’s own economic distress under the weight of the sanctions imposed on the regime. However, reading between the lines, the Iranian government may have in mind the shipment of oil, weaponry and other goodies to Egypt in exchange for some old-fashioned bartering.

What can Egypt offer?  It can start with providing Iran with unfettered access to the Suez Canal.  The Egyptian government already started to open the canal to Iranian warships last year.

Second, while Egypt may not formally break diplomatic relations with Israel and withdraw from the Camp David peace treaty in the foreseeable future, it can revert to a cold peace and allow Iranian arms to transit the Sinai on the way to Hamas in Gaza.

Third, while the U.S. State Department does not presently consider Egypt to be a major hub for money laundering, the State Department said in its 2012 Money Laundering Report that “Egypt has a large informal cash economy, and many financial transactions are undocumented or do not enter the banking system.”

The State Department report went on to say that Egypt’s government “has been hesitant to utilize its money laundering statutes to their full legal extent.”  Egypt’s informal economy and lack of careful documentation of many financial transactions provides Iran with a potential vehicle to evade sanctions through networks of front groups, in order to move funds into and out of Egypt and access the international banking system through indirect channels.

Fourth, as long as Morsi’s Muslim Brotherhood-dominated regime remains in power, its rapprochement with Iran provides Iran with more legitimacy in the region and lessens Iran’s diplomatic isolation.

If the Obama administration is not careful, it risks being played in the emerging Middle East chess board as alliances shift rapidly as an unintended consequence of the Arab Spring.

John Kerry has indicated that he plans to visit Egypt and Israel in his first trip as the new Secretary of State.  He would do well to convey a firm message to Mohammed Morsi that he ultimately has to choose between aligning himself with a rogue terrorist-sponsoring regime with unacceptable nuclear arms ambitions whose own economy is in shambles, or the countries, led by the United States, that can help Egypt move beyond its current travails. Morsi has to be made to understand that he will pay a heavy price if he tries to play both ends against the middle.