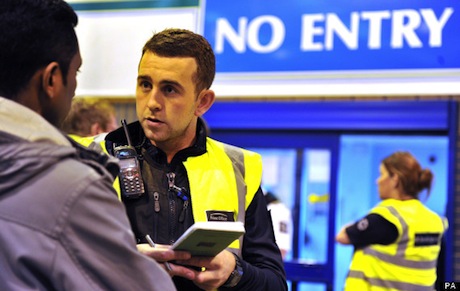 So, another week, another bad week to be an immigrant in the UK.

On Friday, we had Nick Clegg calling for £1,000 „security bonds” for immigrants – a policy sure to put off poor legitimate migrants, like students or holidaymakers, but equally one that sounds great to the sort of people who want to disappear into the welfare state. Cleggbonds are cheaper than the average gangmaster, and the Lib Dems won’t peel your skin off with a rug-cutter if you don’t repay them. This was his attempt to „wrest the issue of immigration out of the hands of extremists and populists”, which, of course, you must be if you oppose unlimited migration.

Never to be outdone, Cameron has come back today boasting that net migration has fallen drastically under his premiership. Am I the only person in Britain that thinks if you make lots of British people leave the country, and lots of foreigners not want to come, you’ve clearly made the country manifestly worse and shouldn’t be boasting about it Of course, there’s also Labour’s lamentable record on immigration, talking tough while simultaneously opening the floodgates, allowing in two million extra people without any thought of the pressure this would put on services.

So, all the major parties have failed, and all of them have been dragged to the Right by Ukip. To be honest, I’m the sort of metropolitan liberal who doesn’t mind having my coffee served to me by someone called Slavoj as opposed to someone called Steve. I’ve got a lot more time for Slavoj, who was willing to move from Novgorod and work, as opposed to Steve, who isn’t willing to move from Newcastle and lives on benefits. Indeed, if Steve is a Geordie, I’m more likely to understand Slavoj in conversation as well. I’m quite happy with sensibly controlled immigration, especially if it’s implemented in a pro-business way, but it strikes me that a lot of the politicians who want supply-side reforms in other areas are mysteriously silent on the immigration issue.

If you ask businesses, especially tech businesses, the one supply side reform they would like, it’s not making it easier to sack people, or being able to pay less than the minimum wage: it’s a simplification of non-EU visa rules.

It’s all fine if you want to hire a developer who is from the EU, but as soon as you want to take on a Yank, or a Russian or an Indian, it all becomes incredibly complex, bureaucratic and expensive. While the concerns about immigration are all about a flood of cheap labour, and people vanishing into the welfare state, the people we’ve actually have clamped down are skilled, hard-working valuable migrants, like students who have studied here who want to stay on.

Things are even worse for foreign entrepreneurs. In the first year of the Coalition, the rules for visas were changed – essentially, if you had £50,000, and were coming to the UK to start a business, you got let in, no questions asked and all you had to do was prove you had the cash. There was a small amount of fraud, with fake businesses being created and so on, which the Government rightly realised was a problem. Unfortunately, the solution they have come up with is a total disaster.

Now, an entrepreneur who wants a UK visa has to attend an interview where he has to pitch his business plan to an immigration officer, in a sort of Dragon’s Den where Theo Paphitis is replaced by some hopeless bureaucrat. Inevitably, the fraudsters present a wonderful scheme and get waved through, whereas real entrepreneurs – especially ones with complex tech business – get pooh-pooed and turned away. I can’t help thinking: if people were good at picking and backing businesses to succeed, they wouldn’t be civil servants in the Home Office. And there’s no appeal. If Mark Zuckerberg sat down with a Home Office drone, could he sell him the concept of Facebook If he couldn’t, that’s it: no entry to Britain.

At the same time, the Government is bending over backwards to lend money to small firms. Tech City now has a colony of small quirky startups, many of which are legitimate, but many of which are chancers, leeching off the real tech businesses. You know, „social media consultancies” run by two guys who know each other from Eton called Jolyon and Percival. Ask any entrepreneur around the roundabout, and they’ll tell you they get four or five calls a day from these bottom-feeders, often recruitment consultants or web-based magazines, charging you £10,000 for a page of advertorial.

There are plenty of great foreign entrepreneurs in the UK – Taavet Hinrikus, the Estonian who was the first employee at Skype, who’s since set up his his own money transfer business, Transferwise, springs to mind. He’s Estonian, so it was fairly easy for him to live and work in the UK; but if he was from say, Finland or Iceland, he might not have come here, as our climate for foreign entrepreneurs is stupidly harsh.

In conclusion, we’re cracking down on the wrong kinds of migrants. Forcing wealthy Shanghai holidaymakers to pay an extra £1000 to come here isn’t going to stop gangmasters importing cockle pickers from Jungshau autonomous province. Reaching a target of net migration of 100,000 when more than 100,000 students come here a year is a Sisyphean task. And barring real entrepreneurs from coming while helping parasites is going to help no one. The trouble is, we have an unstoppable tide of cheap labour from the EU; and until politicians do something about that, they will be limited to cracking down on non-EU migration, which hurts all of us.

Vince Cable is often bashed for being anti-business, but ask any entrepreneur which politician’s immigration policy is the most business-friendly. It should worry us that one lone unpopular Lib Dem is making the supply-side reform argument that the City, the tech industry and business in general want to hear.