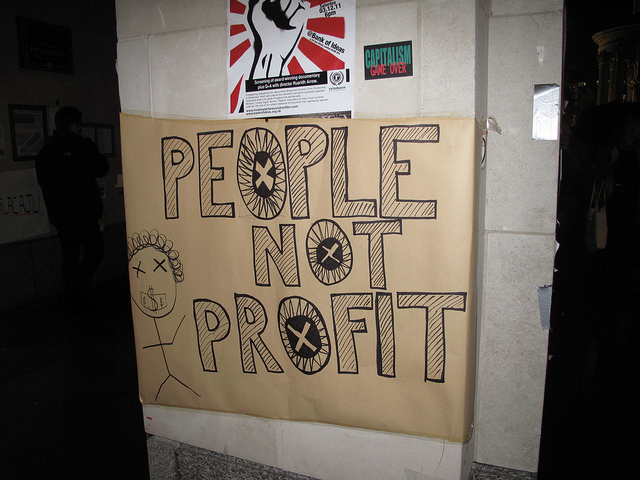 The UK comedian and actor Russell Brand appeared on a BBC talk show last week to denounce the concept of profits. The pampered multi-millionaire called for the establishment of „…a socialist egalitarian system based on the massive redistribution of wealth, heavy taxation of corporations, and massive responsibilities for energy companies exploiting the environment.”

In what has become an all-too-common spectacle of ignorant and intellectually challenged celebs on both side of the Atlantic spouting socialist slogans, Brand epitomized these qualities and the unmitigated hypocrisy of all leftists. Mr. Brand has amassed a $15 million fortune as a very funny and talented comedian and actor — so obviously his proposed „massive redistribution of wealth” does not apply to him. Remember, socialism is for you and me, never for the socialist.

Just as Harry Reid said the very same week: „The only people who feel there shouldn’t be more coming in to the federal government from the rich people are the Republicans in the Congress. Everybody else, including the rich people, are willing to pay more. They want to pay more.”

Senator Reid apparently doesn’t want to pay more; he is also a multi-millionaire who insists on holding on to his $5 million dollars and has never offered to turn it over to the federal government for redistribution. But then, just like the pigs in George Orwell’s Animal Farm, he is busy doing all the brainwork for us little people. You would not rob us of our repose, would you comrades?

Mr. Brand went on to say that:

„[British Prime Minister] David Cameron says profit isn’t a dirty word, well I say profit is a filthy word… I think the very concept of profit should be very much reduced because wherever there is profit there is also deficit. This system currently doesn’t address these ideas.”

Apparently his millions in profits are not filthy because they were earned as a jester, and not by making products that create wealth or contribute to the unparalleled prosperity of Western civilization. Without profit there can be no prosperity. The right of the individual to retain the fruits of his labor is the very essence of liberty and the only means for a society to flourish. Everyone works for profit; weather he is a garage attendant, wealthy manufacturer, or millionaire celebrity, the free citizen expects to make as much as much money as his ambition, talents, and time allow — and to keep what he earns.

It is the desire for profit that provides us with all the comforts of modern life. Oil company executives, engineers, scientists, technicians, and laborers do not invent incredible devices for extracting petroleum from miles beneath the sea, and work in hostile and dangerous countries and climates because they wish to serve their fellow man — they do it for profit. Pharmaceutical companies that have created thousands of miracle drugs to cure disease and ease suffering did so to make profits from the sale of those drugs. Likewise your local grocer, florist, auto mechanic, lawyer, and landscaper provide their products and services to you for „filthy” profit — not because you are a nice guy or gal. This is not a new discovery. As Adam Smith wrote in the 18th century,

„It is not from the benevolence of the butcher, the brewer, or the baker that we expect our dinner, but from their regard to their own interest. We address ourselves, not to their humanity, but to their self-love…”

Neither money nor profit is inherently evil. In fact, free-market capitalism is the only economic system ever devised that permits human liberty, maximizes prosperity, and facilitates relative peace and harmony among people and nations. Before America adopted a mixed economy of socialism and free markets, people were free to pursue their interests and industry and to make as much money as their skills would take them. Free people chasing their own dreams and desires deal with one another through the use of money and have no need to covet what someone else has. Neither do they need to employ force to obtain what they want, unless they lack the character to get what they want through work. Wealth is created by individuals and used as a tool of fair exchange between equals. As the great American philosopher Ayn Rand put it,

Mr. Brand concluded with a prediction of revolution and encouraged people to not bother voting, „there is going to be a revolution… don’t bother voting. Stop voting stop pretending, wake up, be in reality now. Why vote? We know it’s not going to make any difference.”

Like many well-meaning but ill-informed people, Mr. Brand senses — correctly — that the game is rigged (In both the UK and USA), but somehow believes that the solution to the unfair system our governments have established is to turn over what little remains of our liberty and property to the very same corrupt political class that created this mess. It is our political overlords that created the centralized command and control economy, central banks, and regulations to benefit their political cronies and corporate donors. It is utterly baffling that people like Russell Brand can be led to believe that the very same political establishment will set everything right if we would just give up what’s left of our freedom and income; That’s just you and me of course — not Mr. Brand, or George Clooney ($160 million), or Nancy Pelosi ($35.5 million), John McCain ($10.5 million), Lindsey Graham ($1.5 million), Barack Obama ($12.5 million), etc, etc… You would not rob them of their repose, would you comrades?

Todd Douglas is a former U.S. Navy intelligence specialist attached to the Defense Intelligence Agency, state police commander, and author of the new book, A Republic, if you can keep it; a chronicle of the American counterrevolution.