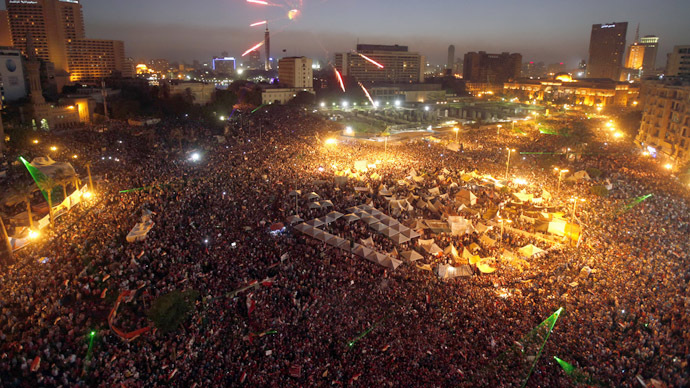 Sunday marked Mohamed Morsi’s first anniversary as president of Egypt. By evening it was clear—if there had been any doubt left—that he had little to celebrate.

Already on Saturday, amid mounting violence, Morsi’s Muslim Brotherhood had had to whisk him away to safety amid reports that protesters planned to march on his presidential palace. At least eight people, including a young American man, had already been killed in demonstrations. Offices of the Brotherhood’s political arm, the Freedom and Justice Party, had been set on fire in the cities of Alexandria and Dakahlia.

The opponents of the Islamist regime claimed to have gathered 22 million signatures on a petition to oust Morsi—almost double the 13 million who had voted for him a year earlier. These opponents are an unlikely coalition of (relative) liberals, supporters of the previous regime of Hosni Mubarak, and even more extreme Islamists of a Salafist bent. All are united—for now—only by an iron determination to topple Morsi and his regime.

That regime, in the eyes of the protest movement, is responsible for Egypt’s ongoing economic deterioration that includes mounting inflation, wide-scale unemployment, a steep drop in tourism, shortages of basic commodities, plummeting foreign investment, and dwindling cash reserves. Accompanying the acute economic crisis is a breakdown in social order with the police rendered impotent, rampant crime in the streets, and minorities like Christians and Shiites suffering severe persecution.

The protesters also charge the regime with subverting Egypt’s political institutions. The parliament was disbanded a year ago, and early in June the Senate was declared unlawful. The Brotherhood, say its opponents, has imposed its own Islamist constitution on the country, stacked government with its supporters, and generally betrayed its supposedly democratic mandate while miserably mismanaging the country.

The crisis intensified on Sunday. During the day one person was killed and close to thirty injured when Morsi supporters and opponents clashed in the city of Bani Suef, south of Cairo. Troops and armored vehicles were deployed in Cairo and army helicopters flew above the city. Fears of violence were reportedly prompting many people to try and flee the country, with 60,000 leaving it via Cairo International Airport since Friday.

The key question was whether, as the heat of the day subsided toward evening, the protesters indeed had enough support to bring vast numbers of people into the streets. By early evening it was clear that the answer was affirmative as hundreds of thousands materialized in Cairo’s Tahrir Square and in cities throughout the country. The Tahrir Square protesters used the same chant—“The people want the fall of the regime!”—that was heard there two and a half years ago in the anti-Mubarak revolt. A much smaller group of Islamist supporters of Morsi, reportedly around 10,000, gathered around a mosque near the presidential palace.

By late Sunday evening there were reports of about 175 people injured in protests throughout the country. The Brotherhood said its Cairo headquarters had been attacked by protesters firing shotguns and throwing Molotov cocktails and rocks. The initial impression, then, is that the protest has real backing and energy and the regime would be wrong to count on it fizzling out.

A key issue is the role of the army. Earlier in the week the chief of staff, Gen. Abdel-Fattah al-Sisi, had warned that the army would intervene if things got out of control. Having been removed from power a year ago by Morsi, after having ruled the country for the year and a half since Mubarak’s fall, the military establishment is considered resentful toward the regime but cognizant of the fact that Washington, as Israeli commentator Boaz Bismuth puts it, “supports the elected president, even if it is Morsi. The military, however, can force Morsi to make concessions.”

The coming days will tell to what extent the regime is in trouble; but Sunday’s events can hardly leave it sanguine. It would be encouraging to think most Egyptians now realize the mistake of hastily deposing the lesser evil, Mubarak, and in effect clearing the path for the considerably greater evil of Morsi and his Islamists. Confronted, though, by yet another Middle Eastern spectacle of roiling violence, with Salafists constituting one faction of the rebels, even relative optimism has to be cautious.