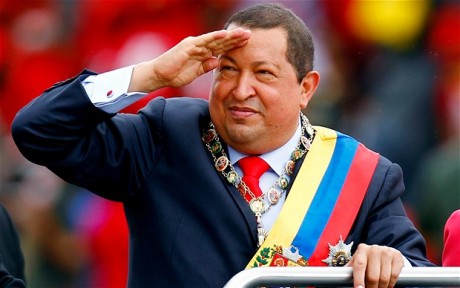 We can already see the beginnings of an Eva Perón-style death cult. Latin Americans love a martyr, and Hugo Chávez’s early death has sparked bizarre conspiracy theories about CIA plots and biological weapons. Angry, histrionic and megalomaniac, the comandante was none the less popular to the end.

There is an old Venezuelan saying that there are no good nor bad presidents, only presidents when the oil price is high and when it is low. Chávez benefited from an extraordinary spike in the value of his country’s main export, but the wealth did not spill over into the villages and shanty towns. Instead, it was squandered in a series of boondoggles, with so many new ministries created that Venezuelans lost count. The only people who did well were the red-shirted party cadres, who grew rich on state contracts, known as “boligarchs”: a play on the Bolivarian revolution which Chávez had launched.

Why, then, was Chavism so electorally successful – not just in Venezuela but across the region? Chavism, by the way, is an especially apt word for the phenomenon: its exponents like to emphasise their anti-elitism by engaging in foul-mouthed tirades which are shockingly vulgar by the standards of Latin-American political discourse.

Ecuador’s Rafael Correa and Bolivia’s Evo Morales followed the Bolivarian script to the letter, closing down their parliaments and supreme courts, scrapping their constitutions and “refounding” their states on socialist principles. In Brazil, Argentina, Nicaragua, Paraguay and even traditionally staid and bourgeois Uruguay, the outward forms of constitutionalism were respected, but power shifted to bellicose Left-wing populists.

It would be going too far to call these leaders dictators: they are anti-parliamentary rather than anti-democratic. Having got themselves more or less legitimately elected, they dismantle the checks on their power: the judiciary, opposition parties, electoral commissions, private television stations.

In order to remain popular, they have to keep picking fights: with Washington, with the IMF, with “the rich” and, when all else fails, with each other. Chávez was forever threatening Colombia. Morales makes noises about Bolivian provinces lost to Chile in the 19th century. Kirchner stamps and shouts about the Falkland Islands.

It’s a form of displacement activity. The last thing these leaders want is to be judged on their economic record. Despite a commodity boom from which South America ought to have been a massive beneficiary, they have presided over corruption, inflation and shortages.

Why, then, do they keep winning? The answer owes a great deal to the failure of the centre-Right, which had an opportunity in the Nineties and squandered it. Only in Colombia and, to a certain extent, Chile, is there an electorally credible popular conservatism. Elsewhere, Rightist leaders have barely begun to understand the gravity of their predicament, nor to overcome their sense of entitlement. For a long time, politics in Latin America was the province of people with family wealth, white skins and foreign university degrees. Chavism is a 15-year-old reaction against that system. In the poor barrios, with corrugated iron roofs, people vote to punish the old elites.

Latin America’s tragedy is easily summarised. The state does too little and too much. Too little in the sense that it fails to operate a universal system of justice in which property rights are secure, disputes arbitrated by independent magistrates and redress available to individuals; too much in the sense that it runs massive public works schemes, owns large corporations, and buys electoral support by placing voters on the payroll. Such a system cannot fail to be corrupt. If you have a dispute with your neighbour, you don’t rely on the courts; you phone your friend who knows a general. If you want to get rich, you don’t make things or sell things; you secure a government contract. After years of misgovernment, Latin Americans have given up: they elect autocrats not in the hope of a better future, but as a howl of rage.

Is there any hope? Yes. One country that rears above the red tide is Colombia, whose former leader, Alvaro Uribe, achieved a level of popularity that the Bolivarians could only dream of. How? Partly by defeating the terrorist groups and disarming the militias, so that Colombia came back under the rule of law; and partly by a privatisation programme that reduced opportunities for nepotism.

Across most of the continent, though, politics remains a tussle between different statist factions, all seeking to get their hands on the government machine. Many voters have turned away in resignation.

But don’t imagine that it couldn’t happen closer to home. We need only look at the eurozone’s stricken Mediterranean members to see similar conditions forming. Representative democracy is still a relatively new phenomenon in some countries. It may prove more fragile than we think.

Daniel Hannan is a Conservative MEP for South East England