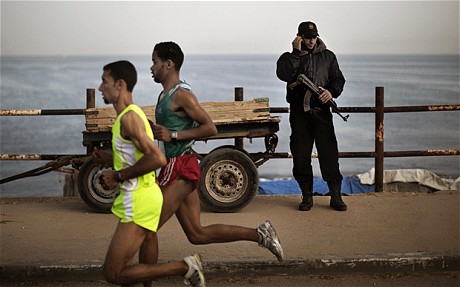 There’s a wonderful moment in Radical Chic, Tom Wolfe’s essay about the party Leonard and Felicia Bernstein gave for the Black Panthers in their Park Avenue duplex, when Field Marshall John Cox, who’s addressing the assembled group of Upper East Side socialites, refers to „the merchants” who are „the exploiters of the black community”. He’s talking about the Jews, of course, and it strikes a discordant note because a majority of the rich, Left-wing sympathisers at the party are themselves Jewish. „For God’s sake, Cox, don’t open that can of worms,” writes Wolfe.

For those who aren’t sympathetic to fashionable, PC causes, there’s something particularly satisfying about moments like this. Suddenly, the romantic, Left-wing perception of a minority group, which invariably casts them as victims of oppression, runs up against an unwelcome reality, such as the fact that they’re all raving anti-Semites.

There’s a great example of this kind of reality check on the Guardian’s website today. It’s a Comment Is Free piece by a journalist called Nabila Ramdani with impeccable right-on credentials. As she says in her biog (referring to herself in the third person): „She was named a Young Global Leader 2012 by the World Economic Forum and was a winner of the inaugural European Muslim Woman of Influence Award in 2010. She has been named by DNA (Decide Now Act) as one of 101 most innovative individuals in the world for social good.”

In the article, Ramdani describes her disappointment that the Gaza marathon, which was due to take place on 10th April, has been cancelled. Ramdani, who’s of Algerian descent, had planned to compete in the marathon to express her solidarity with the poor, benighted victims of Israeli imperialist aggression. „Through spending a few agonising hours with the ordinary people of Gaza on their war-ravaged roads, we would not only be able to empathise with their despair, but publicise it to the world outside,” she writes.

Alas, she can no longer make this noble gesture. Why? Because the marathon has been cancelled following the decision of Hamas to ban women from participating. Turns out that the political party Ramdani describes as an „Islamic resistance movement” – in reality, a Holocaust-denying terrorist organisation hell bent on the destruction of Israel – isn’t particularly keen on equal rights for women. Women running in marathons – even if their bodies are covered from head to foot – is „un-Islamic”, apparently. Who would have thunk it?

Ramdani is understandably disappointed. Not because she’s finally woken up to the fact that her beloved Gaza is, in fact, a one-party state controlled by a bunch of Islamist thugs who have scant regard for the rights of women or, indeed, any other minorities. No, she’s disappointed because Hamas has thrown away an opportunity „to draw attention to what is arguably the most pressing political problem in the Middle East, if not the world, today”. That’s Israel’s „oppression” of Gaza and the West Bank, obviously, not the state-orchestrated genocide currently taking place in Syria.

That’s the problem with reality checks. You’d think a Left-wing feminist might be pulled up short by the discovery that the „Islamic resistance movement” she’s making common cause with turns out to be deeply misogynistic. But no. The important thing is to stay focused on the wickedness of Israel. As Albert Einstein said, „If the facts don’t fit the theory, change the facts.”

I would love to have been present at the Palestinian Centre for Human Rights in Gaza when Hamas dropped this bombshell. Though I couldn’t hope to produce something as brilliant as Tom Wolfe’s essay. Well worth a read, by the way. The whole piece, which was originally the cover story of the 8th June 1970 issue of New York magazine, can be read here.