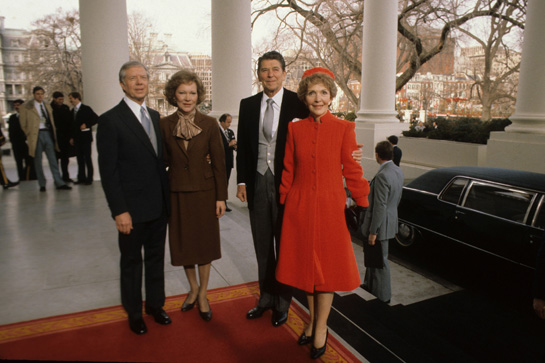 In September 1980, Gallup had President Carter up by 4 percentage points over some former Hollywood actor named Ronald Reagan. The incumbent president and commander in chief had already delivered his catastrophic “crisis of confidence” speech, the economy was imploding — double-digit inflation, a national gas crisis — and there was, as now, an Iran impasse and a bungling foreign policy. Still, the onetime peanut farmer held a solid lead and looked about to win re-election.

Americans, it turned out, just weren’t sure about this Reagan guy. Yes, America was a mess, and the new guy was highly likeable, seemed to talk a good game, but they worried: What do we know about this guy? Is he really ready to be president? And do we really want this man with his finger on the nuclear button?

Skip ahead to 2012. The economy has been imploding for four years, gas prices are double what they were when President Obama took office, inflation is rising and incomes are falling, there’s another Democrat-led bungling foreign policy and, to boot, another Iran crisis. Still, Gallup had the former community organizer and less-than-one-term senator up by 6 points.

Now, as then, Americans just aren’t sure about this Mitt Romney guy. Yes, he talks a good game, seems likeable enough, has a wonderful wife and family, but like Mr. Reagan, America is asking: Who is this guy? Is he really ready to lead? And can he, as he claims, really pull the country out of this malaise and make America that shining city on a hill?

Americans will decide in October, just as they did 22 years ago, when the presidential race changed in just two hours. A look back now to refresh the memory.

By mid-October 1980, Mr. Carter’s Gallup margin had grown to 8 points. He was so comfortably ahead he simply skipped the first presidential debate, leaving Mr. Reagan to battle it out with independent John Anderson. The Republican acquitted himself just fine, but hardly anyone tuned in. It was like watching the Harlem Globetrotters go up against the Washington Generals (what with Mr. Anderson pledging to raise taxes on gasoline to encourage conservation).

(And just a side note: The League of Women Voters, sponsor of the debates, threatened to place an empty chair on the stage to represent the absent president — guess Clint Eastwood was watching.)

Mr. Carter agreed to attend the second debate (the only head-to-head between the two) as long as Mr. Anderson, now dead in the water, was excluded. Mr. Reagan opposed the move but finally gave in; the debate was held just a week before Election Day. Some 80 million people pulled up a chair in front of the TV.

The incumbent lambasted the challenger: “Gov. Reagan, as a matter of fact, began his political career campaigning around this nation against Medicare. Now we have an opportunity to move toward national health insurance,” Mr. Carter said.

Mr. Reagan just smiled and shook his head. He didn’t interrupt; he wasn’t angry. When it was his turn to answer, he turned toward Mr. Carter, smiled again, shook his head, and said, “There you go again.” It was a line the former California governor would use again and again, always with a wry grin, a slight shake of the head. He was, of course, calling the president of the United States a liar, but in the nicest way possible. And Americans responded — “Hey, this guy isn’t as bad as I thought.”

The debate covered some weighty ground — the ongoing Iranian hostage crisis (Iran would set the 52 Americans hostage free the very day Mr. Reagan took the oath of office), the economy, nuclear proliferation and arms treaties. And it was the latter Q&A, at the height of the Cold War, that set Americans straight about Mr. Reagan’s ability to be commander in chief.

“I have seen four wars in my lifetime,” Mr. Reagan said. “I’m a father of sons; I have a grandson. I don’t ever want to see another generation of young Americans bleed their lives into sandy beachheads in the Pacific, or rice paddies and jungles in Asia, or the muddy, bloody battlefields of Europe.”

Mr. Carter, 56, looking pale, worn-out and old compared to the vigorous (and heavily makeupped) 69-year-old cowboy at the other podium, then tried to humanize the issue as well.

“I think to close out this discussion,” he said, “it would be better to put into perspective what we’re talking about. I had a discussion with my daughter, Amy, the other day, before I came here, to ask her what the most important issue was. She said she thought nuclear weaponry — and the control of nuclear arms.”

A nice line, but was the president actually taking counsel from his 12-year-old daughter? In the span of a few minutes, the challenger looked like commander in chief — and Americans knew it. The Republican, berated by a liberal press for months, had slipped past the media and dropped directly into living rooms across the country.

But it was Mr. Reagan’s closer that killed (as an actor and entertainer, he no doubt knew one must always go out on a high note). Looking into the camera, he laid out the simple choice America had:

“Next Tuesday is Election Day. Next Tuesday, all of you will go to the polls and stand there in the polling place and make a decision. I think when you make that decision it might be well if you would ask yourself: Are you better off now than you were four years ago? Is it easier for you to go and buy things in the stores than it was four years ago? Is there more or less unemployment in the country than there was four years ago? Is America as respected throughout the world as it was? Do you feel that our security is as safe, that we’re as strong as we were four years ago? And if you answer all of those questions ‘yes,’ why then, I think your choice is very obvious as to whom you will vote for.

“If you don’t agree, if you don’t think that this course that we’ve been on for the last four years is what you would like to see us follow for the next four, then I could suggest another choice that you have,” he said.

Mr. Romney will need to present just such a stark choice for voters in the debates.