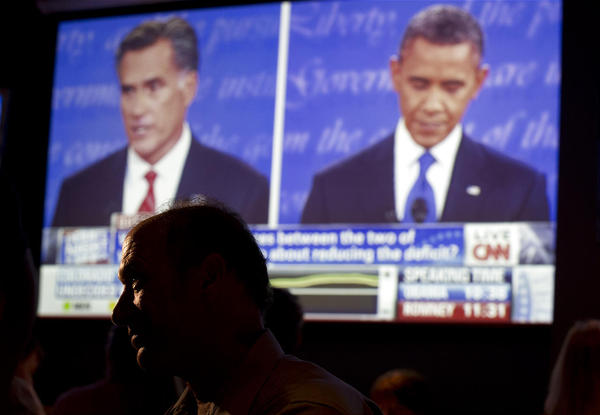 In an outrage destined for the history books, the moderator of last night’s hotly contested presidential debate lied about President Obama’s deadly bungling in Libya after Obama overtly asked her on live television to do so.

It was truly unprecedented and could only have happened in the Age of Obama.

During the town hall-format debate with an audience of undecided voters, Crowley provided an assist to Obama to help him perpetuate his administration’s ongoing cover-up about the murder of four Americans –including the U.S. ambassador- at the U.S. consulate in Benghazi, Libya, this past Sept. 11. Reports indicate that Ambassador Chris Stevens and other officials were provided inadequate security in a particularly hostile part of Libya.

Hours before the debate Secretary of State Hillary Clinton, sent to Lima, Peru, by Obama’s campaign to make her inaccessible, said it was her responsibility to provide security for America’s diplomatic personnel. But that was as close to a mea culpa as Clinton was willing to come.

“In the wake of an attack like this, in the fog of war, there’s always going to be confusion,” she said. That fog can be especially difficult to navigate when both the White House and Foggy Bottom are run by mendacity-loving Saul Alinsky-worshipers, but I digress.

During the debate GOP candidate Mitt Romney stated –correctly- that “it took the president 14 days before he called the attack in Benghazi an act of terror.” Romney’s supporters have been saying for weeks that Obama didn’t want to label the assault on the U.S. mission a terrorist attack because to do so would be an admission that the administration’s foreign policy was in flames.

After Romney’s statement Obama interjected, “Get the transcript,” like an eager contestant asking for a lifeline on “Who Wants to Be a Millionaire?”

At that cue Crowley cut off Romney, claiming that Obama had in fact called the attack an “act of terror” around the time it took place. Buoyed by Crowley’s compliance, Obama boasted, “Can you say that a little louder, Candy?”

“He did call it an act of terror,” she said of the president. “It did as well take – it did as well take two weeks or so for the whole idea there being a riot out there about this tape to come out. You [Romney] are correct about that.”

Crowley, it should be noted, is a more polite, more personable version of Martha Raddatz, the pretended moderator who tag-teamed Paul Ryan with smilin’ Joe Biden last week. This makes Crowley more dangerous than Raddatz, who was arguably more obnoxious than outright opinionated in her conduct during the vice presidential debate.

In the White House’s Rose Garden on Sept. 12, Obama suggested that an anti-Islam video had provoked the attack. He then offered a throw-away line, making a general statement that “no acts of terror would shake the resolve of this great nation.” Obama said what happened in Benghazi was “a terrible act” and promised that “justice will be done.” At no time did he say the events in Benghazi were instigated by terrorists.

Over the following two weeks, the Obama administration continued to resist calling the events in Benghazi a terrorist attack. On five different Sunday morning TV talk shows, Susan Rice, U.S. Ambassador to the United Nations, said the attack in that Libyan city stemmed from violent protests related to a “heinous and offensive” video.

On Sept. 25, Obama again refused to label the attack an act of terrorism during a softball appearance on TV’s “The View,” saying that an investigation was still ongoing. He said the same thing later the same day during an address at the United Nations, blaming the violence in Libya on the video and making the much-ridiculed assertion that “The future must not belong to those who slander the prophet of Islam.”

After the debate, an unapologetic Crowley jovially admitted on CNN that Romney was correct but blamed her victim, the former Massachusetts governor, for the sin of linguistic imprecision.

Well, you know, again, I’d heard the president’s speech at the time. I sort of re-read a lot of stuff about Libya because I knew we’d probably get a Libya question, so I kind of wanted to be up on it. So we knew that the president had, had said, you know, these acts of terrors [sic] won’t stand or whatever the whole quote was and I think actually, you know, because, right after that I did turn around and say but you are totally correct, that they spent two weeks telling us that this was about a tape and that there was a, you know, this riot right outside the Benghazi consulate, which there wasn’t. So he was right in the main but I just think he picked the wrong word.

But the damage, which may or may not be long-lasting, is now done and the debate is finished. Just another day in the mainstream media.

Former New Hampshire governor and Romney surrogate John Sununu excoriated Crowley on the Fox News Channel. “Candy Crowley had no business doing a real-time, if you will, fact check, because she was wrong,” he said. Crowley aided President Obama who “was absolutely deliberate in his dishonesty on this issue of whether it was terrorism.”

The Obama administration’s failure to provide security in Benghazi, an act that led to the death of four Americans, is “unconscionable,” Sununu said.

Commentator Charles Krauthammer skewered Obama for being “completely at sea,” and not even trying to answer the question about consulate security. Obama acted offended at suggestions he would mislead the American people, Krauthammer said, even though he put his U.N. ambassador on television to lie to the public about what transpired in Benghazi.

Romney missed “a huge opening” to pound Obama over consulate security, Krauthammer opined. Of course if there was a genuine opportunity Romney missed, it’s because he was too busy defending himself after Crowley effectively called him a liar.

Despite the standoff on Benghazi, Romney acquitted himself well.

He repeated his winning phrase, “trickle down government,” to refer to Obama’s unshakable belief that all will be well if government continues to grow in size and scope.

He explained that it was important to bringing tax rates down because it makes it easier for small businesses to hire new employees and he hit Obama over the weak economy and skyrocketing growth in dependency on government.

“We don’t have to live like this,” Romney said.

Yesterday’s debate, which took place at Hofstra University in Hempstead, N.Y., came after the Oct. 3 presidential debate in which Romney gave Obama the thrashing of his political career. It also came after Vice President Joe Biden’s unprecedented 85 interruptions of GOP challenger Paul Ryan in the Oct. 11 vice presidential debate.

On Fox News Channel pollster Frank Luntz’s focus group of maybe 20 now-undecided voters who voted for Obama in 2008 was harshly critical of Obama.

In a moment of candor that slipped past network censors, one man said Obama’s been “bullshitting” the public. The focus group members agreed and even seemed angry at the president, blaming him for mismanaging the economy and praising Romney’s experience creating jobs in the private sector.

In a development that ought to make left-wingers heads’ explode, even the focus group on ultra-liberal MSNBC swung for Romney.

Meanwhile, Obama has been getting a steady stream of bad news lately on the polling front.

A devastating Gallup poll released yesterday showed that Romney had the support of an impressive 50 percent of likely voters compared to Obama’s 46 percent. The poll consisted of responses from a large sample, in this case of 2,723 likely voters, all interviewed after Obama was annihilated by Romney in the Oct. 3 debate in Denver.

Even the staid statisticians at Gallup acknowledge that even though “debates are rarely transformative events in presidential elections,” Obama “has lost ground with voters since the start of the month, most likely reflecting his poorly reviewed performance in the first presidential debate.”

In recent months maybe, just maybe, the polls weren’t necessarily wrong. Perhaps they reflected voter ambivalence. Americans were open to the possibility of firing Obama but they weren’t yet sold on Romney.

When the endless parade of progressive pundits argued in the last few months that Obama was such an inspirational figure that mundane issues like national security and the economy no longer mattered to voters, it turns out they were projecting, not commenting.