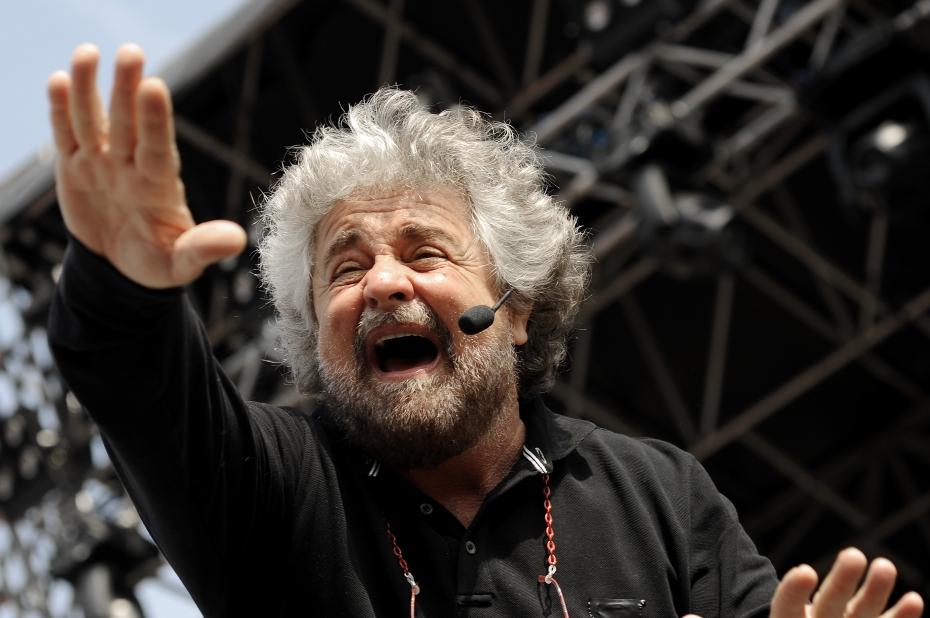 In the terrible economic crisis of 1922 Benito Mussolini got 25% of the vote in Italy. Two years later he had more than a majority.

You know the rest.

In the economic crisis of 2013, Beppe Grillo received 24% of the vote (see last week’s analysis of Grillo’s political beliefs). This week he blocked a government from forming. Grillo now controls the Senate, but he is going for a majority in both houses in the upcoming vote in June.

That’s in Italy, but in Greece the Golden Dawn party is following the same path. So is the new Hungarian fascist resurgence. In Germany it’s called the „Pirate Party.”

Europe’s political class is shocked and panicked. They are pretending Grillo is just a „populist” and a „reformer” – but he also wants to „process” all the Jews in the world, who are responsible for all the evil. Grillo wants to nationalize the banks and abolish interest rates, „just like the Islamic Development Bank.”

To understand the new upsurge of European fascism, you have to imagine what it’s like to live in Rome.

Imagine the US government being sunk in red ink. The United Nations suspends the US Constitution and compels us to adopt a new UN currency called the UNO, designed to favor other countries. The United States no longer runs its own currency. Our economy tanks and our deficit keeps getting worse.

Therefore the UN unilaterally appoints a caretaker president for the US named Monti, who imposes radical budget cuts on our dependent welfare state.

1. Social Security is cut by half. People have to live on 700 euros per month.

2. ObamaCare is cut by half. Two hospitals in Rome do not pay their medical staffs for six months.

3. Taxes on income and sales are raised to an average of 50%.

5. Politicians and bureaucrats get major pay raises. The figurehead President of the US doubles his salary.

Government at all levels is corrupt. It’s the only way people can survive. Everybody is playing double games. People are doing two jobs and running their own businesses out of government offices. Everybody cheats on taxes. The mafia controls half the country. Survival depends on the black market, the black economy. The currency is kept artificially high, so exports crash.

It’s happened to Italy under the European Union. Don’t think it can’t happen here. Obama is a Euro socialist, representing faculty lounge socialism in America, so completely arrogant and cocksure that Paul Krugman just knows how to run the trillion-dollar US economy. Nobody else can figure it out, but Krugman knows that he knows. Our new rulers are control freaks, just as free market economists have said since Adam Smith. They are six year olds steering the family car and thinking they are in control until…

… until it all blows up.

This week Europe blew up. The media haven’t caught up yet, because they are what they are. But the markets are catching up fast.

This is a huge event for the United States, because our political elite is bound and determined to turn us into Europe. Hasn’t the EU found the answer to war and peace and prosperity forever?

Our Democrats believe it. Europe is their model. Every batty new idea they have is copied from the glorious European Union. Twenty years ago they still celebrated the Soviet Union, until that house of cards crumbled. Now they have shifted their fantasy paradise to Europe.

Over there, fifty years of increasingly centralized control have made it impossible for voters to be heard. The political parties are stuck in GroupThink. Only the fascist „protest” parties agitate for reform. The ruling class doesn’t listen. They don’t have to – they don’t have to run for election.

So European voters fled to the fascists to express their rage and despair. Imagine one out of four US voters going for Lincoln Rockwell, and you get the idea.

In Italy, Beppe Grillo the Clown just received 24% of the vote, the biggest percentage a single party has received since Benito Mussolini, Il Duce, in 1922, another economic crisis year.

The Italian vote gives the Clown control of the Senate, and the biggest voice in the lower house. The Grillini now speak for the capital city of Rome. Since fascism is illegal in Italy, the Five Star Party pretends not to be fascist; but scratch the surface and that old grinning ghost stares back at you.)

The EU and US media are still in denial, but Italian party politicians instantly flew to Berlin to talk with Angela Merkel, and came back to build a common front against Grillo the Clown. But the Joker refused to play. He wants another election in June.

Europe is our future. It’s Obama style of Chicago „governance,” and as long as the people were inundated by EU propaganda they believed that Europe had discovered the secret of peace and welfare forever. Talk to any European and that’s what you hear. They keep wondering why we don’t follow them to Never-Neverland. If you tell question them they turn a deaf ear. They’re mentally stuck.

As long as America defends Europe, they will keep hating us and pretending they are running the ocean liner, like kids with plastic steering wheels.

The key to the whole farce is Europe’s „democracy deficit,” which means that the people can vote for the European Parliament – but it has no legislative powers at all. The Parliament is a Potemkin front. It has no power to pass binding laws.

On the other hand, the unelected ruling class has centralized more and more power in „Commissions” – which is what the word „Soviets” used to mean. But the EU has no electoral legitimacy. Nobody votes for the people who really run the place. That means the EU receives no feedback about the impact of its cult-like policy fantasies. When the people wanted a public referendum on the EU, the political class arrogantly told them to go… yes.

In France, the Grand Corps of the State („Enarques”) run the government. Germany and Britain are similar. Together they appoint the European ruling elite. This is the EU socialist Apparat, the Political Machine that controls everything. And yes, there are capitalists, but they work hand-in-glove with the Apparat. It’s Crony Social Capitalism (technically the same as fascism).

As a result normal people feel totally powerless. As long as the Ponzi scheme lasts, the victims loved it. The media churned out neo-imperialist propaganda about how Europe had finally discovered peace and welfare forever, and everybody wanted to believe.

Today, southern and eastern Europe are running into a brick wall, designed by Europe’s ruling class in its delusional way. The north blames the south, and vice versa. Nobody can stop the ruling class from its mad rush to destruction, so we are seeing a ‘protest vote” in Germany, Poland, eastern Europe, and the PIIGS – the Mediterranean coastal countries plus Ireland.

The only protest party people can vote for are barely disguised fascists: The Five Star party in Italy, Golden Dawn in Greece, Pirate Party in Germany, and fascist insurgents in Hungary.

Here’s how it’s done. In Italy Beppe Grillo ran as a sly comedian, spinning off conspiracy theories about ‘chemtrails” (jet contrails) that poison the Italian people, the Rockefellers, Rothschilds and Illuminati who run the world to oppress the poor, and all the usual paranoid fantasies. But he also attacked massive corruption (which is true) and self-serving politicians (also true), and the euro currency that killed Italian exports (also true). Grillo voiced criticisms that other politicians avoided. Everybody knows about massive corruption, for example. Grillo said it.

Now the Clown has his own sources of money and ideology, which lead straight to Tehran, as we have pointed out. The Clown hates the Jews, and his website mentions „Jews” 2,500 times, and „Iran” 2,500 times. The Islamic Development Bank doesn’t charge interest, the Clown tells us. This is pure Islamic fascist propaganda. Banks that loan free money don’t exist in the real world, because they can’t survive. But demagogues tell sucker lies, and this is a good one. Beppe tells his followers that he will nationalize the banks (like Il Duce) and give away free loans. It’s like Obama phones, straight from Obama’s stash. The suckers love it.

The Jews run the world by charging „usury” (this is an old, old story in Europe). In Beppe’s Fantasyland money comes free, exactly what Islamist propaganda says. Beppe tells the world that „Everything I know about the Middle East I’ve learned from my father-in-law” Parvin Tajik, who runs a major construction business in Tehran, and therefore has to be in cahoots with the super-corrupt mullahs.

Guess who plays the scapegoat in this age-old drama? Yup.

People laughed at old Beppe the Clown for fifteen years.

Today the joke’s on them.