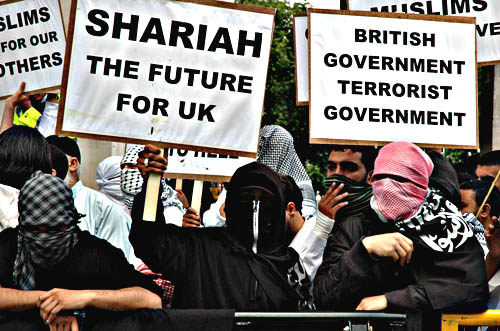 At yesterday’s debut showing of Silent Conquest: The End of Freedom of Expression in the West at The Heritage Foundation, one of the most shocking moments was a comment by Lars Hedegaard, a Danish historian and chairman of the Danish Free Press Society.

Hedegaard was asked: Could the screening of this movie and the free intellectual discussion of the advance of Islamic Sharia law in the West have taken place at a European—say British—think tank “No, I don’t think so” was his chilling answer.

The subjects of Islam and Sharia have simply become taboo in many European countries. Free speech advocates, among them moderate Muslim voices, are deeply concerned.

As shown in Silent Conquest, throughout Europe, in Canada, and even in the United States, judicial systems in countries with large Muslim minorities are under pressure to adopt Sharia free speech restrictions. As a result, in many places, including Denmark, it is now a crime to say anything negative about Islam or the prophet Mohammed, regardless of whether such statements are factual or not. The concept that even offensive speech is protected—so fundamental to the U.S. Constitution’s First Amendment—is collapsing.

Even if those accused of insulting Islam are acquitted, as Hedegaard himself was after a grueling legal battle, outraged Muslims may take matters in their own hands. Hedegaard narrowly escaped assassination in February when a Muslim immigrant posing as a mailman attempted to shoot him. Another Dane, cartoonist Kurt Westergaard of Mohammed cartoon fame, survived two assaults by knife-wielding immigrants and is now under permanent police protection. (The fact that Denmark has stringent anti-gun laws protected neither from attack, one might add.)

The extent of the problem is startling. In 2010, Dutch filmmaker Geert Wilders was acquitted after being charged with the crime of “insulting Muslims” and “inciting hatred of Muslims.” That same year, Hedegaard was charged with hate speech and finally acquitted two years later by the Danish Supreme Court. In France, actress Brigitte Bardot was sentenced to a two-month suspended sentence and a fine of $15,000 for complaining about Muslims in her neighborhood. In Canada, author Mark Steyn was acquitted in 2008 after a prolonged legal battle over his article “Why the Future Belongs to Islam.”

Even though some are acquitted, all of this has a chilling effect. Europeans “are acting as though Sharia law has already been adopted in Europe,” Nasar Khader, a moderate Muslim member of the Danish parliament, stated in the movie.

Disturbingly, so does the U.S. government. While the 9/11 Commission report from 2007 contained hundreds of references to words such as Islam, Muslim, and Jihad, not a single instance of these words is found in the national security strategy documents of the Obama Administration, a deliberate government decision. Furthermore, former Secretary of State Hillary Clinton threw U.S. support behind U.N. anti-blasphemy Resolution 16/18 in December 2011, which would effectively repress free speech if enacted in member countries.

At least in the United States, the First Amendment still stands as a bulwark, and lawmakers have taken up the cause of free speech and the free exercise of religion. On March 7, Senator Jim Inhofe (R-OK) introduced S. Res. 69, “Calling for the protection of religious rights and freedoms in the Arab world.” It specifically “urges in the strongest possible terms that the United States Government lead the international effort to repeal existing blasphemy laws.”

Though it is not likely the Obama Administration will heed this plea, it is imperative for the future of this country, this civilization, that the defenders of freedom remain vigilant.