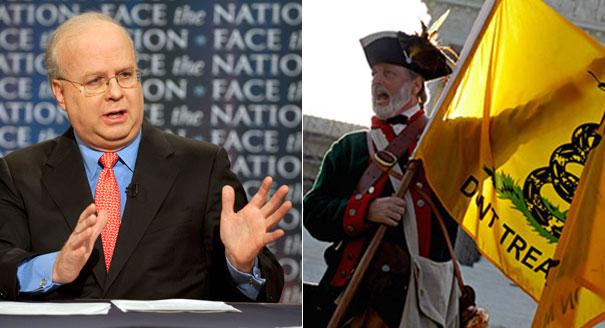 According to Politico, “a political colonoscopy is going on before our eyes.” Yuck. Karl Rove has set up a Super PAC to keep controversial conservatives from winning Republican primaries and the Senate leadership has established a “buddy system” to keep Tea Party congressmen in line (“buddy” as in “you should probably vote the way we tell you to, buddy…”). But the most important changes are taking place at Fox where heavyweights Sarah Palin and Dick Morris are out as contributors. A lot of this is post-election house clearing (CNN has moved staff around, too) but it also suggests that the GOP establishment is blaming the 2012 election loss on the Tea Party and the impolite Right.

Is its assessment correct? Yes and no. “Yes” in the sense that the outspoken weirdness of some Tea Party candidates shifted the balance of the Senate in the Democratic Party’s favour and “yes” in that they allowed Obama to play the culture war card so brilliantly against Mitt Romney. The margin of the 2012 election was decided by gender, race and age – and while the GOP did well with its old white guy base, Tea Party radicalism helped Obama to build a winning advantage among “everyone else”. And so moderates are now conspiring to silence the conservatives.

But, in defence of conservatives, the Republican Party did not actually run a Tea Party candidate in 2012. It ran a moderate from Massachusetts with a record of inventing Obamacare and supporting legalised abortion. Romney might have u-turned on all those positions, but the idea that the Tea Party hijacked the GOP nomination in 2012 is simply absurd. Its candidates were beaten in the primaries and it was denied a significant role at the convention. Not a single primetime convention speech included the words “Tea Party.” During the election, Akin and Mourdock might’ve stumbled on to abortion but Romney declined to make it an issue at all. He ducked away from Benghazi and Fast and Furious. In his focus on trimming the budget and bringing competence to government, Mitt Romney was about as radical (and exciting) as Cliff Richard.

Therefore, Tea Partiers are likely to argue that the GOP lost in 2012 not because it emulated them but because it ignored them. That’s partly why they’re fighting Karl Rove’s attempt to purge them – why should they take the punishment when they didn’t commit the crime? On his radio show, Mark Levin asked the question that we’re all thinking – “Who the hell died and made Karl Rove queen for the day?” – and went on to point out that Rove was the guy who helped put Bush in to the White House, who spent all the money that pushed America further in to debt and so put the USA where it is today. Why should the Tea Party defer to an establishment that a) loses elections and b) governs like Democrats? To quote Levin,

These people need a hard, swift kick in the ass off the public stage because they’re making it much more difficult to persuade more and more Americans that we have to win some elections quickly. These people are getting rich off of this federal leviathan. They go on T.V. and talk about how awful Obama is, but they attack us. They really don’t think Obama is that awful. What bothers them about Obama is that their not running things, that’s what really bothers them.

In short, the Tea Party revolution will continue because Tea Partiers see no need for it to end – and they even have the Senate Majority Leader in their sites. Given this, what are the establishment’s chances for beating them down? At first glance, poor. Thanks to the primary system there’s no reason why conservative candidates shouldn’t continue to run and do well in Republican contests. And the party machine might actually do itself harm by campaigning against them. As Kellyanne Conway points out, “Ironically, the establishment wizards tried to stop the two most prominent Hispanic Republicans in Washington from winning the U.S. Senate seats they now hold” – Marco Rubio and Ted Cruz. Variety and ideological competition can actually help the GOP in the long run. The Tea Party hasn’t been a complete disaster for the GOP.

But the establishment may yet succeed in silencing the Right if Fox turns decisively against the Tea Party. For that would starve them of the oxygen of national publicity and contribute to a national pivot to the centre. It’s interesting to read that Fox is now both America’s “most trusted” and “least trusted” news service, which suggests that audiences are tiring of its partisanship. It looks like Roger Ailes has decided that 2012 really did mark a historic shift in politics and that his product has to adapt to survive. If this means excluding maverick voices from Fox shows, the Tea Party could end up losing its stake in the national conversation. It will continue to make news, but its opportunity to speak for itself without hostile editorialising will be lost. Then it’ll be reduced to a handful of movement media outlets without a wider audience. As I’ve written a lot recently, the greatest threat facing the Tea Party is ghettoisation. You can’t speak “truth to power” if no one’s listening.

1 Comment → The Tea Party can survive Karl Rove’s wrath, but being purged from Fox News could help kill it