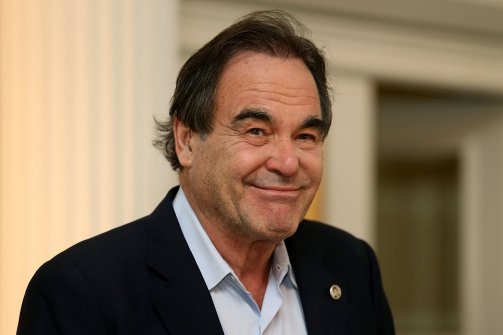 The Untold History of the United States, by Oliver Stone and Peter Kuznick, weighs in at 750 pages, an elephantine encyclopedia of neo-communist demonology. None of it is “untold” and on every page one hears the sound of a barrel being scraped. David Horowitz rightly called it “unbelievable crap,” but some readers might profit from an examination of the places where the book most needs stool softener and a polygraph test.

This must be the only book endorsed by Bill Maher, Daniel Ellsberg, and Mikhail Gorbachev, which makes sense. The only hero is former vice president Henry Wallace, the Progressive Party candidate for president of the United States in 1948. He’s portrayed here as a kind of American Gorbachev, the only hope to save the United States which, by setting off atomic bombs in Hiroshima and Nagasaki, “once again, proved itself unready to provide the kind of leadership a desperate world cried out for.”

The authors tout Wallace’s “Century of the Common Man,” but fail to note that, as one observer put it, Wallace’s Communist backers confused the Common Man with the Comintern. That organization does not appear in the book, which contains material about the USSR, Stalin, Communism and such.

The Nazi-Soviet Pact does appear but consider the treatment of the 1939 alliance that started World War II. It was an “unsavory deal,” Stalin struck with Hitler because he feared a “German-Polish alliance” to attack the USSR. It was actually to divide up Europe and crush the democracies, but that’s how Stalin and his echo-chamber spun it.

True to form, Untold History lists only two atrocities for Stalin, the massacre of Polish officers in the Katyn forest and “having the Red Army stop on the banks of the Vistula while the Germans put down the Warsaw uprising.” Nothing about the genocide noted in the Black Book of Communism and, more recently, Timothy Snyder’s Bloodlands: Europe Between Hitler and Stalin. The authors even include a photo of Russians mourning Stalin, who at the time of his death in 1953 was about to unleash terror on Soviet Jews, then slandered as “rootless cosmopolitans.”

As Ronald Radosh and Joyce Milton noted in The Rosenberg File, American Communists Julius and Ethel Rosenberg were responsible for giving nuclear weapons to the worst mass murder in history. Here they are only “accused atomic spies.” Stone and Kuznick tout “the legendary Communist-backed Abraham Lincoln Brigade,” but ignore the real story of this Stalinist militia as outlined in Cecil Eby’s Comrades and Commissars.

Stone and Kuznick are not eager to explain what American Stalinists were up to during the Nazi-Soviet Pact. Readers will not learn that they worked in concert with pro-Nazi organizations against the allies, particularly Britain. They picketed the White House and called FDR a “warmonger,” a charge the authors apply to virtually all U.S. Presidents, particularly Reagan, whose chapter is subtitled “Death Squads for Democracy.” No moral equivalence here. In Untold History, the USSR is the peaceful regime.

After World War II the USSR “had no blueprint for postwar Sovietization of Eastern Europe and hoped to maintain friendly and collaborative relations with its wartime allies.” Further, the Soviets “had gone out of their way to guarantee West Berliners’ access to food and coal from the eastern zone or from direct Soviet provisions.” So the heroic Berlin airlift touted in American schools was all for nothing.

The USSR oppressed half or Europe for nearly half a century, smashed reform in Hungary and Czechoslovakia, and later invaded Afghanistan. Yet CIA director William Casey’s picture of a “hostile, expansionist USSR” was “an image that didn’t accord with the facts.” And in the1983 the Soviets “mistakenly took a Korean Air Lines passenger jet for a spy plane.”

Thus, the Soviets make “mistakes” and are evaluated by their alleged aspiration for a better world. The United States, on the other hand, commits crimes and is evaluated on the authors’ vision of its record. The USA emerges here as an evil empire eager to spread tyranny and crush the poor by any means necessary. But consider the untold backstory here.