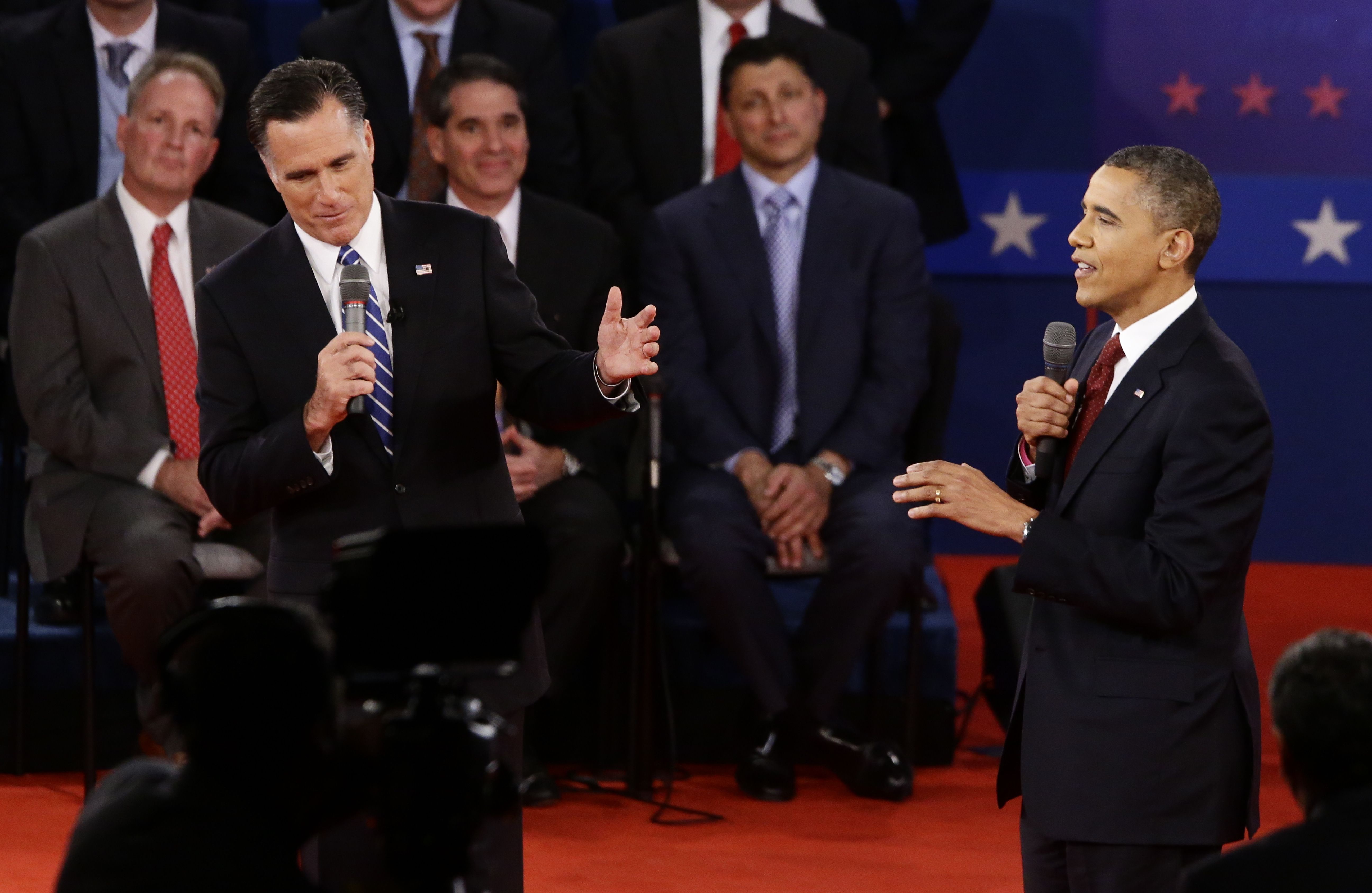 Words don’t matter as much as body language when voters decide on the man they trust to lead the nation.  Despite all the policy debates, all the fact checking, all the pundits, we don’t weigh and balance and research, not most of us.  We don’t even use our forebrains.  We use the most primitive part of our brains, the part that can smell danger, that smells who is the alpha male, who is the omega, who is the rogue.  The nose knows who is the real leader.  We can smell a winner.

Choosing a president isn’t a beauty contest, although good looks help.  It is about masculinity.  It is about confidence and calm strength.  Romney was the happy warrior of the debate.  He was the guy so big he doesn’t have to pick fights or show off his muscles.  They are obvious from his stature and how he conducts himself.   Obama was the junk yard dog, trying to protect his turf by mean looks and threatening to bite.  He didn’t actually get his teeth into Romney a single time.  Obama’s attempt at a steely gaze came across as unpleasant, hostile, even silly.  He didn’t faze Romney, and he didn’t win anyone’s confidence.   He made himself smell nasty.  A snapping dog doesn’t make people feel safe.

The contest to lead the nation touches our most basic instincts.  Our brains evolved 100,000 years ago when we roved the earth in small bands, guided by elders but led by warriors.  There was no room for error, and mistakes were fatal.  Those who followed a vacillating leader were wiped out.  Those who chose a capable leader passed their genes on.  This is something people understand deep in their guts.

I have spent many hours observing wolves in the wild.  Some packs thrive, others disappear.  Some raise their pups in security because they hold onto big, prosperous territories.  Other packs are pushed into marginal areas where tough winters decimate them, and they are preyed upon by rival packs.  Being an alpha male is a demanding role.  It is not based on something as simple as size – it also requires a higher level of aggressiveness, with the guts to dominate every situation.  The alpha defends his territory through intimidation and if necessary, through battle.  The alpha male never hesitates to fight to protect his pack.

Think of the presidential contests of the last fifty years.  Kennedy was more upbeat, confident, more the virile alpha male than Nixon, who came across as Obama does, mean, a whiner.  But when Nixon was matched against Humphrey, he was the more virile.  LBJ passed the sniff test.   Carter didn’t have much, but he beat Ford.  Reagan could have bottled it.  Dukakis smelled like a wimp, making George Walker Bush look good in comparison.  Clinton again was the more upbeat, confident, virile top dog.  Kerry, the French poodle with the rich wife, never had a chance against George W. Bush.  McCain, although a war hero and in fact the more capable male than Obama, wasn’t willing to fight the messiah and disqualified himself.

And so we were left for the last four years with a fake alpha.  Obama has the easy virility of the charmer.  Great on promises, but not trustworthy.  Definitely not someone to go to the mat for you.  At the end of the day, for Obama, it’s all about Obama.  He and Michelle have been having a ball in the White House while 23 million Americans are unemployed, their lives in tatters.  He’s having fun being lionized by Hollywood and going to Las Vegas fundraisers, while our Libyan ambassador is denied security, is given no military back up during the 6 hour firefight in Benghazi, and is dragged through the streets.  Obama shows up for the funeral photo op.

That is not an alpha male.

The kids in college still think Obama’s great, because they don’t know the difference between cool and manhood.  They want the free stuff and pretty dreams he peddles.  Adults can smell something is off.

Obama has been worse than a weak leader.  He is something America has never seen, and that is why he was able to fool people.  It is why our country is such a mess.  He is a false leader.  He never believed in our pack.  He never wanted to protect our territory.  He is a leftist ideologue who wanted to bring our pack down to size and give the other packs a bigger share.

The landslide victory and fawning press of his ‘historic’ election gave him control over both Houses of Congress.  He used the opportunity to crush our economy with Obamacare, EPA regs, and a trillion-dollar-a-year payoff to his base, that has brought our economy to its knees.  He has deprived more Americans of the ability to be self-supporting, independent adults than any time since the Great Depression.

Obama wanted to shrink us on the world stage, and went far beyond bowing and apologizing.  He purposefully, foolishly and oh so dangerously destabilized the Middle East.  Obama got positive headlines for pushing out dictators, only to invite terror organizations – the Muslim Brotherhood and Al Qaeda – to take over Egypt and possibly Libya.  He has allowed the mullahs of Iran to achieve the brink of going nuclear.  He doesn’t really believe in the jihadi movement.  They’re the third world victims and we’re the insensitive, greedy bad guys.

Most Americans don’t know details of foreign policy, and don’t care.  But they watched two men sit at a table last night and fight over who is qualified to lead our country.  Most of the public doesn’t know enough about Iran or Libya or Egypt to tell Romney’s facts from Obama’s fictions.  They can be fooled by a brazen and charming serial liar who tells us he’s done a great job, nothing to worry about with Egypt, Libya, Iran, move along.   Obama’s lies are echoed by a politically corrupted press.  But the public can’t be lied to any more about the economy, because they are living it.  They can’t be fooled into thinking Obama has any intention of doing a course correction and improving his performance in the next four years.

They’ve been looking for a new alpha, a real one.  After the three debates, they’ve found him.  His name is Mitt Romney.