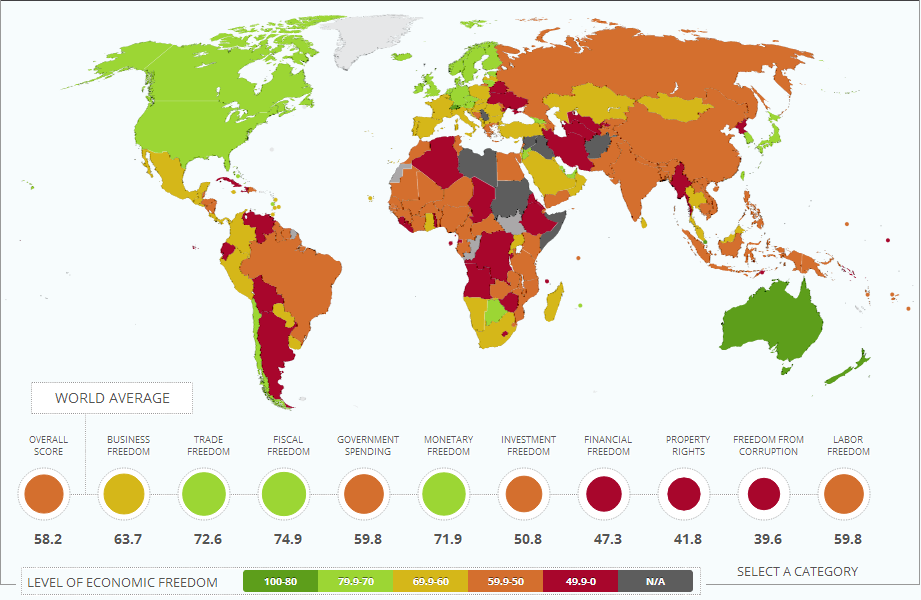 The property rights component is an assessment of the ability of individuals to accumulate private property, secured by clear laws that are fully enforced by the state. It measures the degree to which a country’s laws protect private property rights and the degree to which its government enforces those laws. It also assesses the likelihood that private property will be expropriated and analyzes the independence of the judiciary, the existence of corruption within the judiciary, and the ability of individuals and businesses to enforce contracts.

Each country is graded according to the following criteria:

Corruption erodes economic freedom by introducing insecurity and uncertainty into economic relationships. The score for this component is derived primarily from Transparency International’s Corruption Perceptions Index (CPI) for 2011, which measures the level of corruption in 183 countries.

For countries that are not covered in the CPI, the freedom from corruption score is determined by using the qualitative information from internationally recognized and reliable sources. This procedure considers the extent to which corruption prevails in a country. The higher the level of corruption, the lower the level of overall economic freedom and the lower a country’s score.

No attempt has been made to identify an optimal level of government expenditures. The ideal level will vary from country to country, depending on factors ranging from culture to geography to level of development. However, volumes of research have shown that excessive government spending that causes chronic budget deficits and the accumulation of sovereign debt is one of the most serious drags on economic dynamism.

The methodology treats zero government spending as the benchmark, and underdeveloped countries with little government capacity may receive artificially high scores as a result. However, such governments, which can provide few if any public goods, are likely to receive lower scores on some of the other components of economic freedom (such as property rights, financial freedom, and investment freedom) that reflect government effectiveness.

The expenditure equation used is:

where GEi represents the government expenditure score in country i; Expendituresi represents the total amount of government spending at all levels as a portion of GDP (between 0 and 100); and α is a coefficient to control for variation among scores (set at 0.03). The minimum component score is zero.

Fiscal freedom is a measure of the tax burden imposed by government. It includes direct taxes, in terms of the top marginal tax rates on individual and corporate incomes, and overall taxes, including all forms of direct and indirect taxation at all levels of government, as a percentage of GDP. Thus, the fiscal freedom component is composed of three quantitative factors:

In scoring fiscal freedom, each of these numerical variables is weighted equally as one-third of the component. This equal weighting allows a country to achieve a score as high as 67 based on two of the factors even if it receives a score of 0 on the third.Fiscal freedom scores are calculated with a quadratic cost function to reflect the diminishing revenue returns from very high rates of taxation. The data for each factor are converted to a 100-point scale using the following equation:

where Fiscal Freedomij represents the fiscal freedom in country i for factor j; Factorij represents the value (based on a scale of 0 to 100) in country i for factor j; and α is a coefficient set equal to 0.03. The minimum score for each factor is zero, which is not represented in the printed equation but was utilized because it means that no single high tax burden will make the other two factors irrelevant.

As an example, in the 2013 Index, Mauritius has a flat rate of 15 percent for both individual and corporate tax rates, which yields a score of 93.3 for each of the two factors. Mauritius’s overall tax burden as a portion of GDP is 18.5 percent, yielding a tax burden factor score of 89.7. When the three factors are averaged together, Mauritius’s overall fiscal freedom score becomes 92.1.

Business freedom is an overall indicator of the efficiency of government regulation of business. The quantitative score is derived from an array of measurements of the difficulty of starting, operating, and closing a business. The business freedom score for each country is a number between 0 and 100, with 100 equaling the freest business environment. The score is based on 10 factors, all weighted equally, using data from the World Bank’s Doing Business study:

Each of these raw factors is converted to a scale of 0 to 100, after which the average of the converted values is computed. The result represents the country’s business freedom score. For example, even if a country requires the highest number of procedures for starting a business, which yields a score of zero in that factor, it could still receive a score as high as 90 based on scores in the other nine factors. Canada, for instance, receives scores of 100 in nine of these 10 factors, but the 14 licensing procedures required by the government equate to a score of 64.5 for that factor.

Each factor is converted to a scale of 0 to 100 using the following equation:

which is based on the ratio of the country data for each factor relative to the world average, multiplied by 50. For example, on average worldwide, it takes 18 procedures to get necessary licenses. Canada’s 14 licensing procedures are a factor value better than the average, resulting in a ratio of 1.29. That ratio multiplied by 50 equals the final factor score of 64.5.

For the six countries that are not covered by the World Bank’s Doing Business report, business freedom is scored by analyzing business regulations based on qualitative information from reliable and internationally recognized sources.

The labor freedom component is a quantitative measure that considers various aspects of the legal and regulatory framework of a country’s labor market, including regulations concerning minimum wages, laws inhibiting layoffs, severance requirements, and measurable regulatory restraints on hiring and hours worked.

Six quantitative factors are equally weighted, with each counted as one-sixth of the labor freedom component:1

Based on data collected in connection with the World Bank’s Doing Business study, these factors specifically examine labor regulations that affect “the hiring and redundancy of workers and the rigidity of working hours.”

In constructing the labor freedom score, each of the six factors is converted to a scale of 0 to 100 based on the following equation:

where country i data are calculated relative to the world average and then multiplied by 50. The six factor scores are then averaged for each country, yielding a labor freedom score.

The simple average of the converted values for the six factors is computed for the country’s overall labor freedom score. For example, even if a country had the worst rigidity of hours in the world with a zero score for that factor, it could still get a score as high as 83.3 based on the other five factors.

For the six countries that are not covered by the World Bank’s Doing Business study, the labor freedom component is scored by looking into labor market flexibility based on qualitative information from other reliable and internationally recognized sources.

The score for the monetary freedom component is based on two factors:

where θ1 through θ3 (thetas 1–3) represent three numbers that sum to 1 and are exponentially smaller in sequence (in this case, values of 0.665, 0.245, and 0.090, respectively); Inflationit is the absolute value of the annual inflation rate in country i during year t as measured by the consumer price index; α represents a coefficient that stabilizes the variance of scores; and the price control (PC) penalty is an assigned value of 0–20 points based on the extent of price controls.

The convex (square root) functional form was chosen to create separation among countries with low inflation rates. A concave functional form would essentially treat all hyperinflations as equally bad, whether they were 100 percent price increases annually or 100,000 percent, whereas the square root provides much more gradation. The α coefficient is set to equal 6.333, which converts a 10 percent inflation rate into a freedom score of 80.0 and a 2 percent inflation rate into a score of 91.0.

Trade freedom is a composite measure of the absence of tariff and non-tariff barriers that affect imports and exports of goods and services. The trade freedom score is based on two inputs:

where Trade Freedomi represents the trade freedom in country i; Tariffmax and Tariffmin represent the upper and lower bounds for tariff rates (%); and Tariffi represents the weighted average tariff rate (%) in country i. The minimum tariff is naturally zero percent, and the upper bound was set as 50 percent. An NTB penalty is then subtracted from the base score. The penalty of 5, 10, 15, or 20 points is assigned according to the following scale:

We determine the extent of NTBs in a country’s trade policy regime using both qualitative and quantitative information. Restrictive rules that hinder trade vary widely, and their overlapping and shifting nature makes their complexity difficult to gauge. The categories of NTBs considered in our penalty include:

As an example, Botswana received a trade freedom score of 79.7. By itself, Botswana’s weighted average tariff of 5.2 percent would have yielded a score of 89.7, but the existence of NTBs in Botswana reduced the score by 10 points.

In an economically free country, there would be no constraints on the flow of investment capital. Individuals and firms would be allowed to move their resources into and out of specific activities, both internally and across the country’s borders, without restriction. Such an ideal country would receive a score of 100 on the investment freedom component of the Index of Economic Freedom.

In practice, most countries have a variety of restrictions on investment. Some have different rules for foreign and domestic investment; some restrict access to foreign exchange; some impose restrictions on payments, transfers, and capital transactions; in some, certain industries are closed to foreign investment. Labor regulations, corruption, red tape, weak infrastructure, and political and security conditions can also affect the freedom that investors have in a market.

The Index evaluates a variety of restrictions that are typically imposed on investment. Points, as indicated below, are deducted from the ideal score of 100 for each of the restrictions found in a country’s investment regime. It is not necessary for a government to impose all of the listed restrictions at the maximum level to effectively eliminate investment freedom. Those few governments that impose so many restrictions that they total more than 100 points in deductions have had their scores set at zero.

Expropriation of investments without fair compensation

Up to an additional 20 points may be deducted for security problems, a lack of basic investment infrastructure, or other government policies that indirectly burden the investment process and limit investment freedom.

Financial freedom is a measure of banking efficiency as well as a measure of independence from government control and interference in the financial sector. State ownership of banks and other financial institutions such as insurers and capital markets reduces competition and generally lowers the level of available services.

The Index scores an economy’s financial freedom by looking into the following five broad areas: