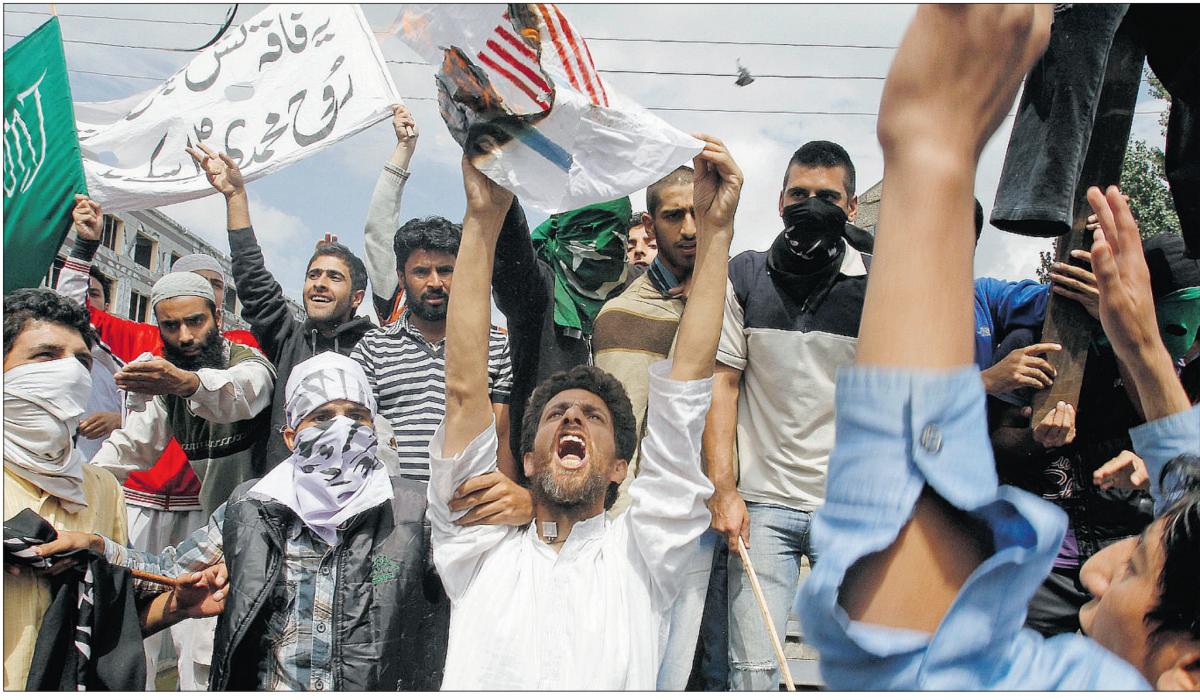 As the Arab Spring model implodes in the Middle East, it is even more urgent that the West understand that behind this ongoing violence is the inexorable Muslim adherence to sharia law.  Sharia is the unremitting lodestar for their actions.

Honest scholarship in our politically correct world is a hard commodity to find.  Thus, a debt is owed to Bostom for his continuing contributions as he give numerous examples to prove that it is the „centrality of Islamic jihadism” (26) that motivates, inspires, instigates, arouses, and stirs its adherents toward the unrelenting goal of a global caliphate.  During the recent Ramadan, for example, there were 260 jihad attacks in 23 countries, with 1,209 dead and 1,910 critically injured.  The so-called religion of peace is extraordinarily bloody, yet leaders of the free world prevaricate about its violence.

The culture of death, destruction, and deceit that is Islam is painstakingly exposed by Bostom.  The deep and abiding anti-Jewish animus in Islam is shown to be integral to Islam.  Neither a byproduct of Western anti-Semitism nor a result of alleged Western imperialism, to say nothing of the Arab-Israeli conflict, Muslim-inspired anti-Jewish sentiment actually dates back to before 869 A.D.

Bostom affirms that this legacy of „Muslim anti-Jewish hatred and violence” is not some aberrant vision of radical Islam, but rather is „rooted in mainstream, orthodox Islamic teachings” (83).  Bostom explodes the oft-repeated idea that „Islam’s society’s hostility is non-theological” and „not related to any specific Islamic doctrine” (74).  He proves that, a thousand years before any „serious colonial penetration of the region” (38) could influence views about Jews, there is evidence that Jews were hated by the Muslims because they stubbornly denied Muhammad’s message.

In fact, the Jews of the period even „coined their own terms for hatred directed at them by Muslims” (38).  Jews used the terms sinuth for Muslim hatred of Jews and sone for the Muslim hater, thus confirming that Islamic anti-Jewish hatred existed a millennium ago.

Another myth central to the discussion of Islam is that Jews and Christians – i.e., dhimmis – were well-treated.  Blasting the oft-repeated notion of cordial Muslim relations toward Jewish and Christian subjects in Muslim-dominated Spain, Bostom cites one pogrom after another within the Muslim world, and he underscores that Koran 9:111 „provides an unequivocal, celebratory invocation of martyrdom during jihad” (82).

Repeatedly, Bostom examines the „contract of the jizya” or „dhimma,” which „encompasses … obligatory and recommended obligations for the conquered non-Muslim” (70).  In the last thirty years, Europe has not withstood the onslaught of Muslims, who deliberately do not assimilate into society, who demand that the countries in which they reside bend to Islamic will, who hysterically call for sharia-imposed judicial decisions, who have made sharia-controlled zones that even police are afraid to enter, who have relegated women to second-class status, and who intimidate and threaten their host governments with violence.

As Bostom emphasizes, each time that Islam gains ascendancy in an area, such transition to dhimmi status results in enslavement, forcible conversion to Islam, and death to the non-believer.

It is no exaggeration to state that there is an ongoing ideological war against the West.  In only thirty years, European support for „common Euro-Arab positions” now finds itself in a perpetual state of „dhimmitude and rabid Judeophobia” (170).  For example, Muslims living in Germany believe that the „German Constitution [is] irreconcilable” with the Koran (172).  Muslim immigrants who demand European welfare benefits actually view these entitlements as a form of jizya to be paid by dhimmis, aka the host country (188).

Particularly revelatory is the chapter entitled „Sayonara Shari’a: Japanese Lessons, Lost?,” where Bostom relates that after World War II, „under stern American guidance” (440), Japan was forced to delegitimize its state religion of Shintoism.  In other words, the state would no longer be able to impose religious belief; nonetheless, the practice of Shintoism as a „private, demilitarized, and depoliticized personal faith” was protected (441).  Individual religious liberty was maintained but could not be imposed upon the general populace.

Sadly, this lesson, which produced a vibrant Japanese reconstruction while protecting individual rights, has been entirely ignored following the U.S.-led military interventions in Afghanistan and Iraq.  Rather than neutralizing the bellicose religious-political-economic creed of Islam, we have actually helped to promote sharia imposition.

How galling it is to learn that there is a tried and true antidote to counter the totalitarianism of state-imposed religion, but that the West ignores it?  It is vital to note that there „has never been a sharia state in history that has not discriminated … against the non Muslims (and Muslim women) under its suzerainty” (447).

Islam refuses to reform.  Thus, it consigns its followers as well as non-Muslims to an existence where no „freedom of conscience” can occur.  The modern-day sermons of jihadists receive their script lines from the ideas of a thousand years ago.  Islam, by its very nature, is unyielding.

Freedom of religion, freedom of press, freedom of speech, assembly, or petition – all of which are cardinal ideas enshrined in the American Bill of Rights – simply do not exist, will never be permitted, and are tantamount to sacrilege within the Islamic world.  In fact, dhimmis possess no rights.

Islamic law and American law are antithetical.  There can be no conciliation because sharia „compromises the tradition of equality for all under the law.”  Sharia consists of draconian punishments such as stoning for adultery and homosexuality, death for apostasy, amputation of hands and feet for highway robbery, and lashing for drinking wine.

Lest one minimize the Koranic influence in the political Islamic world, it should be „noted that Koran 3:112 is featured before the preamble to Hamas’s foundational covenant” (76).  This verse is related to Koranic verses 5:60 and 5:78, which describe the Jews’ transformation into apes and swine (5:60).  And at Palestinian Media Watch, one can read about the demonization of Jews through these vicious canards.  Furthermore, as Bostom points out, the Iranian theocracy sanctions Jew-hatred through its national teacher training programs (78).

Bostom enlightens the reader with background information about the grand mufti of Jerusalem, Hajj Amin el-Husseini, who played a pivotal role in Hitler’s Final Solution.  This non-Aryan was warmly welcomed (243) by Hitler because both men had the same goals: worldwide domination and the extermination of Jews.

It behooves the West to learn from the past.  Bostom discusses the experiences of Whittaker Chambers (497) and Arthur Koestler (508), who initially succumbed to the alleged idealism of communism only to speak out once this dream of utopia revealed itself to be one of the most horrific periods in human history.  Chambers in his book Witness writes a searing expose of communism, and we would be well-served to perceive the similarities between communism’s rejection of freedom and Islam’s totalitarian system.  Bolshevism and Islam share a fanatical worldview and are „impervious to reason.”

Those who fell under the spell of communism soon learned of the dimension of its absolute control.  Millions of people were killed under Stalin.  Deliberate mass starvation coupled with purges and slavery were the hallmarks of communism.  Intellectual reasoning was destroyed.  The same thing happens in the Muslim-dominated world.  Muslims refuse to become citizens of Western countries because for them, the world, in all its entirety, is to be conquered.  Where they reside is secondary, as it is the „strong port” from which an Islamic attack is launched.  Islam, like communism, is an ideology that „is fiercely paranoid [and] conspiratorial” (505).

The jihadist is counting on American ignorance of the ideas in the Koran and of the overarching history of Muslim conquest.  As Andrew McCarthy has explained, the jihadists „make Islam appear unthreatening to limn its detractors as irrational and unracist” (47).  Thus, the jihadist controls the narrative.

Ex-communists enlightened us about the horrors of communism.  Muslim apostates keep warning us about the dangers of Islam.  Yet we ignore it „at our existential peril.”  Bostom proves that any sort of Muslim dialogue or interfaith discourse is pointless because Islam permits no other way of thinking.  At Al Azhar, the center of Islamic studies, a 2008 paper was presented that concluded with the following:

… Muslim dialogue with Jews in Italy is only possible once Israel has been eliminated.

Thus, genocide is a holy duty for the practicing Muslim, as dictated by the Koran and other theological sources of Islam.

Islamic law is totalitarianism.  There can be no freedom in the Western sense of the word, since the „Islamic understanding of ‘freedom,’ or hurriyya means perfect slavery” (524), and this slavery is between Allah the master and his human slaves.

As Bostom explains, Muslims who emigrate to Europe and America have the same determination to modify and change their host countries’ laws and cultural mores.  They wish to „supersede Western conceptions of human rights” with sharia.  Thus, „[u]nder the rule of Islam, there is no equality among people.  Absolutely not” (123).

Why do so many express surprise about Islamic global intentions when repeatedly, Muslim leaders exhort their followers and state that „Islam will return to Europe as a conqueror” (133)?  There is abundant evidence that Muslim leaders wish to transplant the draconian, stultifying laws of sharia onto the world.

The Nazis murdered six million Jews and destroyed millions of other groups during WWII.  Under Stalin, Communism was responsible for the death of 20 million human beings.  Islam has the same global aspirations.  Andrew Bostom’s indefatigable quest to educate is monumental.  To receive such an encyclopedic edification is a gift.  To use it as a vantage point for action is an obligation.  To do less means that we will go down the road to dhimmitude, just as the imam wants.

Eileen can be reached at middlemarch18@gmail.com.